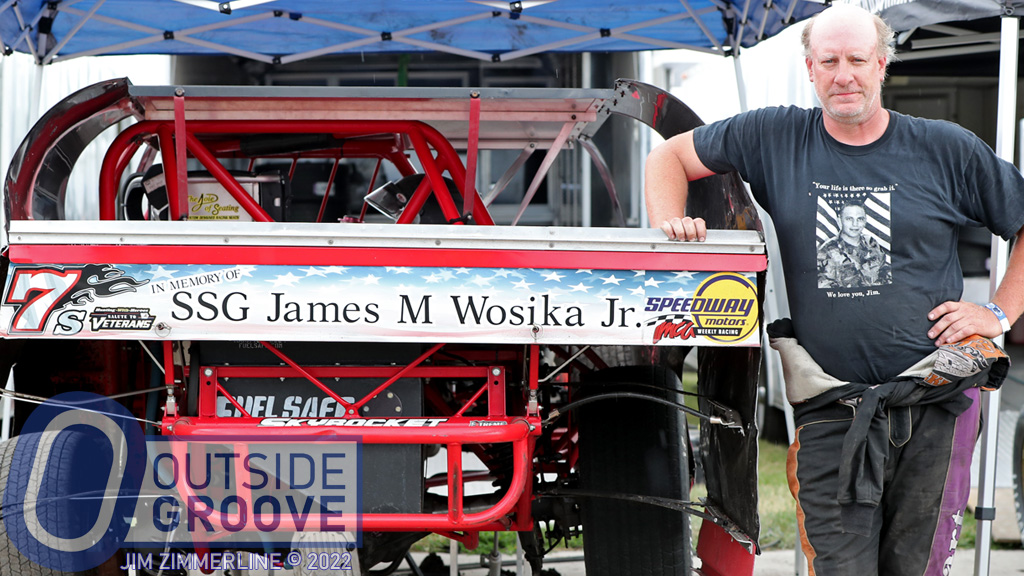 Todd Stinehart carried the name of SSG James M. Wosika Jr. on his IMCA modified during the Hunting with Heroes series. Stinehart had worked with him.

“I was training people on how to run a [saddle-stitching] machine,” said Stinehart, 51, of Waseca, Minnesota. “Jim was one of my trainees. I had him for almost six months. When you’re working 12 hours a day, you’re spending more time with those people than your family … so you get close to those people.”

Wosika’s duties with the Minnesota Army National Guard interrupted his training. They sent him into action in Operation Iraqi Freedom.

“He loved being a soldier,” Stinehart said. “He truly enjoyed helping people. Jim was just doing the saddle-stitching thing for a while and then he wanted to be a paramedic or a fireman.

“His mom would put together packages of coloring books, balls, and kids toys, and send them to him. When he and his guys went into smaller communities, they’d hand [those items] out. The kids loved them.

“I was like, ‘Aren’t you worried about going over there?’ He’s like, ‘No, I got to go. I’m going to get them more balls, more coloring books, more stuff.”

“On Tuesday, January 9th a brave leader told the guys in his squad to get behind some cover as he checked out a potentially dangerous situation, an explosion occurred and Jimmy was killed instantly… His actions that day without question saved the lives of 8 other Soldiers, his fellow brothers. Jim did this without hesistation and knowing Jimmy he would do it again.”

SSG James M. Wosika Jr. was 24. While Stinehart had spent only a half a year with Wosika more than 15 years ago, he still fondly remembers him.

“He was just a great guy,” said Stinehart. “The world needs a lot more people like Jim.”