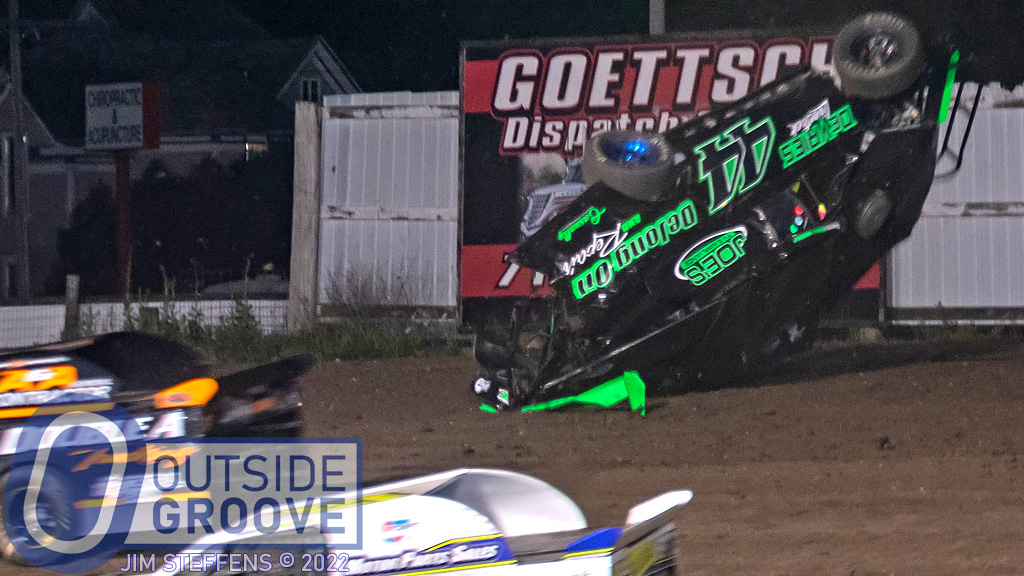 “It was my first time over in 15 years of racing,” Vande Weerd, of Alton, Iowa, said. “Hopefully, it’s not the kind of thing that happens very often.”

Vande Weerd battled three-wide, running in the middle, coming out off of turn four before the calamity occurred.

“We carry a lot of speed going into turn one — the track is long and skinny,” said Vande Weerd. “The car outside me hit my car in the right rear when I was already in attitude mode — counter-steering to the right — which shot me up to the top of the corner.”

His car took to the skies at the top edge of the track.

“The nose of my car pushed into the track, flipping my car three and a half times,” Vande Weerd said. “It all happened so quickly. The car came to rest on its roof.”

“I was hanging upside-down in a full-containment seat, and I realized how hard it would be to get out of the car,” said Vande Weerd. “I took my helmet off. Then, I braced myself with one hand on the roof and pulled my straps loose. I was then able to crawl out.”

Vande Weerd emerged from the wreck unhurt. His car, a NF1 chassis from Nordquist Fabrication, incurred a bit of damage.

“My car had a broken front motor mount and a couple of welds broke around the fuel cell,” Vande Weerd said. “The cockpit stayed intact.”

Cameron Vande Weerd sent his car into Nordquist Fabrication for repairs. He looks forward to returning to the track. Vande Weerd races Wednesdays at Buena Vista Raceway and Saturdays at Worthington Speedway in Minnesota.

“The crash was not as bad as it could have been,” said Vander Weerd. “I’m hoping to get my car back from the shop next week.”