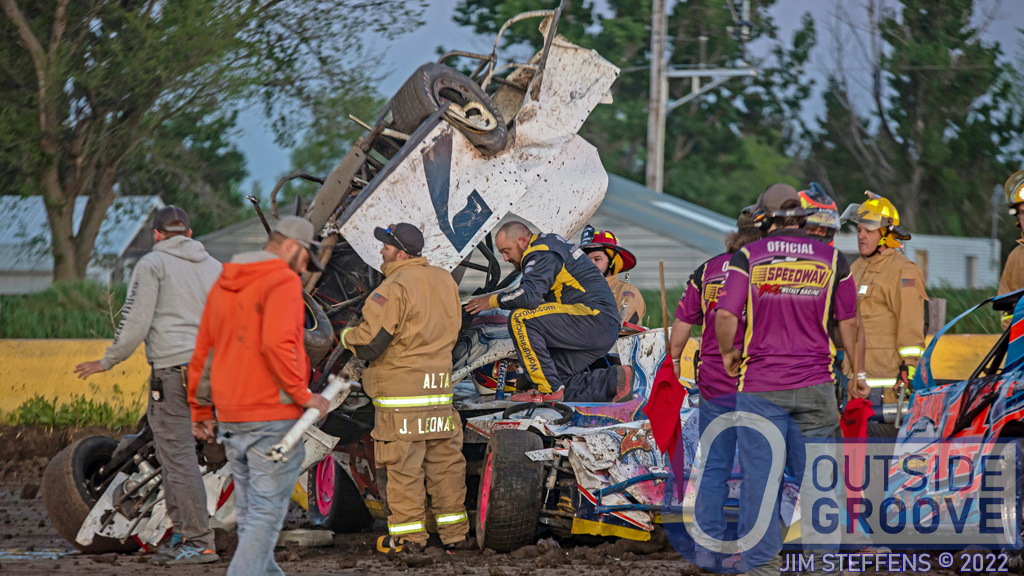 IMCA sport mod drivers Wayne Becker (in the car on top) and Kirk Beatty (car on bottom) found themselves in this precarious situation. The two drivers collided at Buena Vista Raceway in Alta, Iowa, last Wednesday.

“I was low in the corner, drifting up, and Kirk was on the high side, drifting down, as we came out of the turn and headed down the frontstretch,” Becker, of Dakota Dunes, South Dakota, said. “My right rear went over his left front, and that put me into the air. My car was on its nose, spinning, when someone hit Kirk from behind, driving him under me.”

Beatty had quite the view of Becker’s crash.

“When I saw Wayne getting airborne, I hit the brakes hard, but it was too late,” said Beatty, of Sioux City, Iowa. “The blue car [driven by Jake Sachau] pushed me under him. It was one of those racing deals.”

“I climbed out and looked to see if [Becker] was okay,” Beatty said. “He was upside-down in the car, and I could smell fuel. I was more worried about him than anything else.”

Wayne Becker could not get out of the car.

“I was on my roof for quite some time,” Becker said. “I smelled fuel and started thinking how I didn’t want to burn alive.”

Luckily, there was no fire, and safety officials arrived with extinguishers and helped Becker get out of his car unscathed.

Becker sat in a Kirkey full-containment seat, with a Hooker Harness five-point system. He wore a Simpson Bandit helmet and Simpson neck collar. Becker said the crash destroyed his car, a 2010 Harris Auto Racing chassis. He added that he learned from this experience.

“I will never race again without a fire extinguisher inside my car — it just won’t happen,” said Becker. “I’m also writing IMCA a letter suggesting that there should be door bars on the sides of modifieds and sport mods that prevent the rear wheels from hopping over another car’s wheels.”

Beatty used an Ultra Shield Race Products full-containment seat, with a Speedway Motors five-point harness. He had a RaceQuip helmet, but no head-and-neck restraint. The crash damaged Beatty’s car, a 2007, from Harris Auto Racing.

“Every body panel was damaged,” Beatty said. “I lost the radiator, air cleaner, headers, and the left-front suspension. There were even tire marks up the roll cage, but nothing was bent.”

Kirk Beatty took Thursday off from his job at a grain elevator construction supplier. He and his son, Zeph, 16, look to prepare his car for the weekend.

“We needed a new spindle, and we didn’t have one,” said Beatty. “I called my new friend, [Becker], and he had an extra one.”