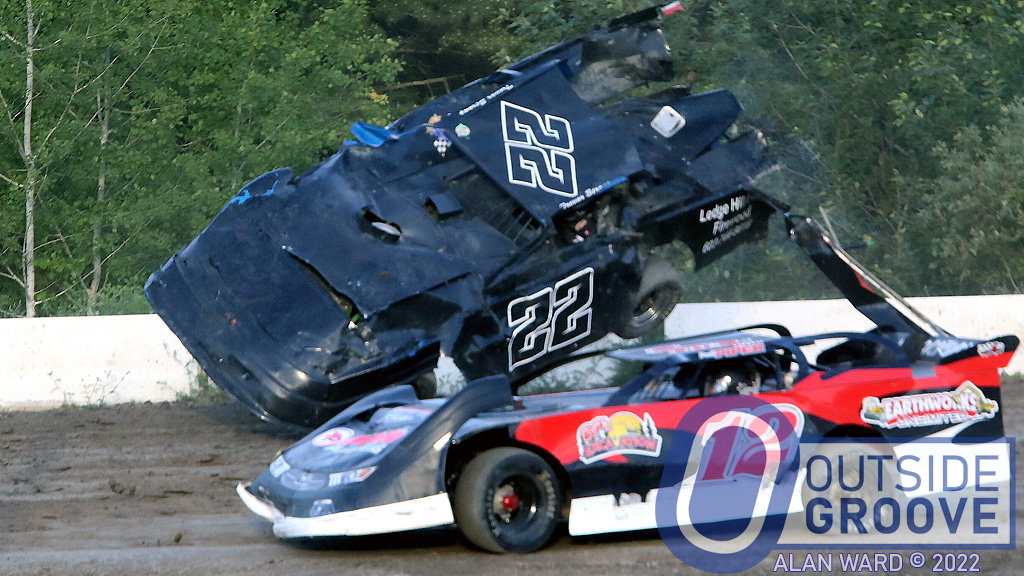 The Rocket chassis piloted by Trevor Strong took to new heights during his qualifier last Saturday. The incident occurred in the limited late model class at Bear Ridge Speedway in Bradford, Vermont.

“I went low to avoid a hole because the track was getting rough in turns one and two,” Strong, 23, of Thornton, New Hampshire, said. “A car behind me hit my left-rear tire and the impact pushed my car up into that hole which caused me to go over.”

This season marks Strong’s sophomore year of steering a limited late model. After his rookie season, he upgraded his late model to a 2009 Rocket chassis.

“The crash bent my new car into an ‘S’ — the front end was bent left, the rear end was bent right, and the middle was in the shape of a ‘V,’” said Strong. “The impact with the track broke some welds. The car is not salvageable.”

While his car’s destroyed, Strong emerged from the wreck unscathed. He sat in a Kirkey full-containment seat, with a G-Force Racing Gear five-point harness. Strong wore a new Impact Racing helmet paired with a Simpson Hybrid head-and-neck restraint.

Center-steer modifieds headline most of the dirt tracks in the Northeast. However, Strong prefers competing with the full-fendered late models, which predominantly race in the Midwest and the Southeast.

“The late models are a niche class in this neck of the woods,” Strong said. “At Bear Ridge Speedway, we race on 10″-wide Hoosier M45 tires, and they just opened up the rules to allow four-link suspensions and birdcages. Hopefully, this will help make the class grow.”

Trevor Strong, who works as a tree surgeon, looks to continue racing in his favorite division.

“I’m tracking down a [late model] chassis, and I have some leads” said Strong. “I want to get back on the track as soon as I can.”