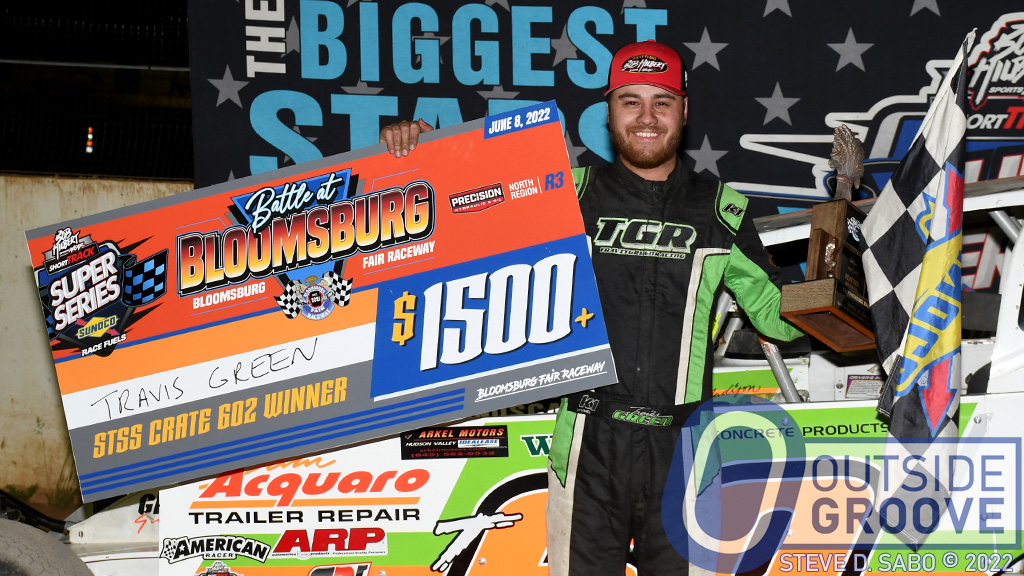 In only his second time at the Bloomsburg Fair Raceway in Pennsylvania, Travis Green found victory lane. It was his first in the crate 602 sportsman class of the Short Track Super Series. He continues a family legacy in the sport that almost ended two generations ago.

Green’s grandfather, Bobby Green, died from injuries sustained in a modified race at New York’s Accord Speedway in 1992.

“That was before I was born,” said Travis, 25, of Wallkill, New York. “It was tough on my dad, Robbie, and my uncle, Dave, who was my father’s crew chief. My great-grandparents wanted them to stop racing.”

Robbie retired from driving when Travis and his brother, Randy Green, who now competes in modifieds, began racing. Robbie and Dave now work on Travis’ and Randy’s cars. Dave is the shock builder.

“My dad told me that if he was able to talk to his dad, he would tell him to ‘keep on racing and do what you love,’” Travis said. “Luckily, we are a lot safer now. We learned a lot since then.”

Travis started racing in the sportsman class four years ago, at age 21.

“I’ve been around racing all my entire life, helping my dad and doing a couple of tryouts in my brother’s car,” said Travis. “While I was in high school, lacrosse is the only sport I wanted. My dad was cool — he did not pressure me to drive. He said I should race when I was ready, and promised to help me out when I was ready, which he did.”

It didn’t take Travis Green long to get acclimated in a race car. He has won 10 features and tied for the DIRTcar 602 crate sportsman championship at Glen Ridge Motorsports Park in Fultonville, New York.

Travis races regularly at Accord Speedway on Fridays and Orange County Fair Speedway in Middletown, New York, on Saturdays. He fills in the remainder of his schedule with races at other tracks, many of which are Short Track Super Series events.

“I traveled to Weedsport [Speedway] and [Land of Legends Raceway in] Canandaigua, [New York,] and I’m racing locally at least two nights a week,” Travis said. “[The amount of racing] has helped my driving skills a ton. I have more confidence than ever. I’d only been to Bloomsburg Fair Raceway once before, and with it being an STSS race, there are no easy drivers to beat.”