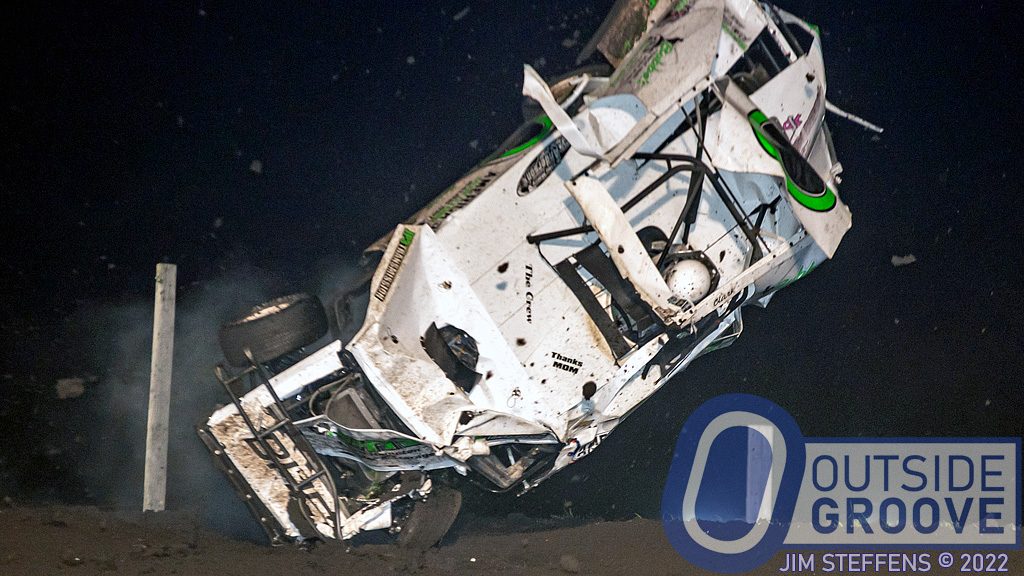 As IMCA modified driver Jamie Anderson came off turn four on the final lap of the feature on Monday, a dirt clod hit him in the helmet. It caused him to hit the berm and flip out of Hancock County Speedway in Britt, Iowa.

“The track was hammer-down, with a huge cushion that was like a shelf,” Anderson, of Meservey, Iowa, said. “A dirt clod came through my window screen, hit my helmet, knocked my head sideways, and caused me to lose control of the car. I hit the shelf violently, and then went up and over.”

Fortunately, the accident itself did not injure him. Anderson steered a GRT chassis by Bob Harris Enterprises. He sat in a Kirkey full-containment seat, with a Crow Safety Gear five-point harness. He wore a Bell helmet paired with a Simpson Hybrid head-and-neck restraint.

“I had my bell rung for a moment from the dirt clod,” said Anderson. “My car’s tail is bent and it needs a few bolt-on parts. Hopefully, we’ll be racing in a couple of days.”

Jamie Anderson has raced since first stepping into the cockpit of a hobby stock in 1997. He and family steer a total of five race cars. Anderson’s wife, Sara, drives a mod lite. Daughters Autumn and Summer compete in sport mods. Stepson Ethan Dirks wheels a hobby stock. Anderson works as a forklift repairman. However, the family also has a side business of mowing lawns and removing snow to finance their racing effort. The quintet of racers calls a pair of Iowa ovals home — Boone Speedway and Hancock County Speedway.

“My uncle Denny Anderson was my hero when I was a kid,” Anderson said. “I sat in the grandstand as a little kid and told my parents that someday I wanted to do that. He’s the reason why I am a racer and that all my kids race.”