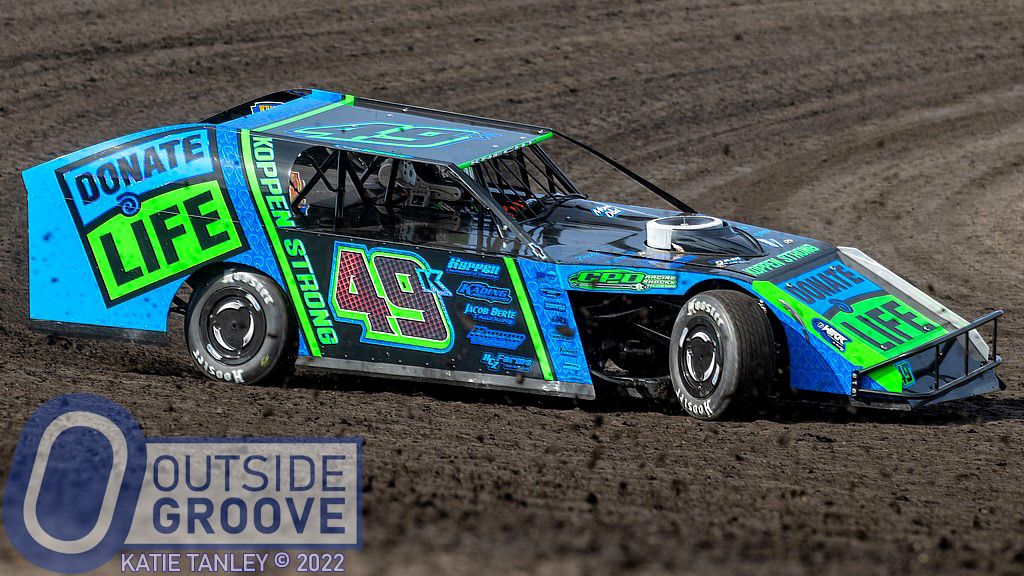 IMCA modified driver Cody Knecht carries a bold message on his car. It promotes Donate Life to encourage organ donations. It also has “Koppen Strong,” in honor of his crew chief and the inspiration behind the wrap, Matt Koppen.

A Firsthand Encounter With the Gift of Life

Koppen, at age 28, experienced a stroke.

“He was in perfect shape, and physically fit,” said Cody Knecht, of Whittemore, Iowa. “He sat down in a chair in December and had a stroke. We later learned he was born with a bad heart — he didn’t know about it until that day.”

Things happened fast. Koppen transferred from his initial hospital in Mason City, to Sioux City, and then to Omaha.

“We were told in Sioux City that he had a 50/50 shot of making it,” Knecht said. “Those were some of the hardest words I ever heard in all of my life. Matt has been my crew chief for seven years — he was like a brother to me.”

Koppen received a heart transplant while in Omaha.

“We know nothing about the [donor] — it was not made public where the heart came from,” said Knecht.

During surgery, Koppen experienced complications, losing blood to his spine, and is paralyzed from his waist down.

Coming Together for Koppen

Koppen was set to marry Kendra Roethler on January 8. Due to his hospitalization, the wedding ceremony could not take place. The two married at Koppen’s hospital bed.

However, the wedding reception did occur, thanks to the Whittemore Fire Department, where bought Koppen and Knecht volunteer.

One of the driving forces behind Koppen’s recovery is watching Knecht race through streaming services. He watched Knecht win at Kossuth County Speedway in Algona, Iowa, three weeks ago. He then won at Hancock County Speedway in Britt, Iowa, last weekend. Both races were thrillers, with Knecht battling Kelly Shryock to the finish.

“Matt called me — he was excited to see me race,” said Knecht. “It felt good to race and give Matt something nice to watch while he is recovering. It’s motivated me as a driver — I want to win for him. I’ve never won twice in a season, and the season is just staring.”

A Call for Organ Donors

Matt Koppen continues to recover in a rehab hospital. Cody Knecht said he won’t return home for probably two months. He remains thankful that someone gave his friend and longtime crew chief the gift of life.

“When Matt had the transplant, we knew we had to do something for him at the racetrack,” Knecht said. “Donate Life is the message. If we didn’t have people who wanted to be organ donors, Matt would not be here.”

Knecht said he receives quite a bit of interest in organ donation at the track.

“I explain to people that there are two sides to being an organ donor,” said Knecht. “This time, we were on the good side. When a life is saved, it wakes you up. Someone is gone, but someone who would have been gone has been given another chance to be here.”