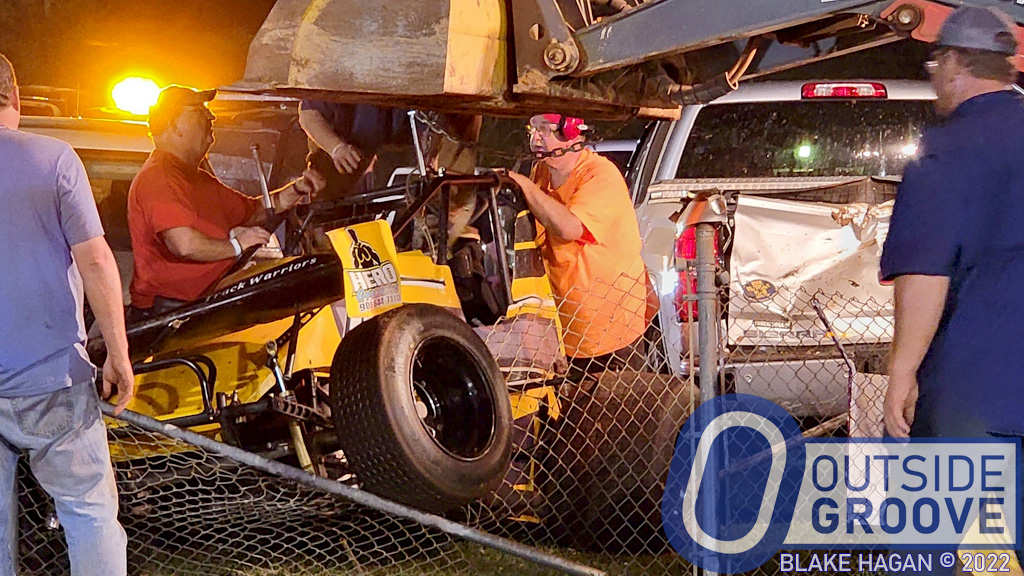 When his throttle stuck, Danny Burke flew off turn two and out of the Talladega Short Track in Eastaboga, Alabama. He came to a rest on a pickup truck. The incident occurred during the United Sprint Car Series (USCS) event on Friday, which was part of the track’s NASCAR weekend.

“I broke one of the levers on the throttle, which allowed the throttle cam to roll over and and stick open,” Burke, of Tallapoosa, Georgia, said. “At that moment, I was just along for the ride.”

That ride consisted of a considerable drop off the racing surface.

“I remember seeing the sky,” said Burke. “Everything got real peaceful and quiet. I had a feeling like I was gliding. Then, I thought, ‘I’ve been gliding too long. This is going to hurt.’ After the initial impact, everything happened quickly.”

Burke found himself atop a pickup truck. It took him a few minutes to catch his breath as rescue crews approached. Other than that, he was not hurt. Burke sat in a full-containment seat from Ultra Shield Race Products paired with a Simpson five-point harness. Burke wore a Bell helmet and a Simpson head-and-neck restraint. He steered a Maxim chassis, which he deemed now totaled. Burke said he could save the car’s engine.

“Every bit of my safety equipment did its job and did it well,” Burke said. “I’ll buy all the same brands again.”

“The pickup I landed on was a pretty new Chevrolet Silverado,” Burke said. “The fan said he had one payment of $400 left on it. He was more worried about me than his truck. When he saw that I was okay, he asked me to autograph the truck’s tailgate. Then, I gave him the nose wing and a side panel off of my car. He was joyful.”

The other car incurred minor damage.

“The Acadia I crashed into was a racer’s car,” Burke said. “The track was worried about getting his car repaired. He told them he would accept free pit passes in trade for the damage.”

Those involved acknowledge the incident could have been far worse. Fortunately, no spectators were injured, according to Burke and Talladega Short Track’s Adam Stewart.