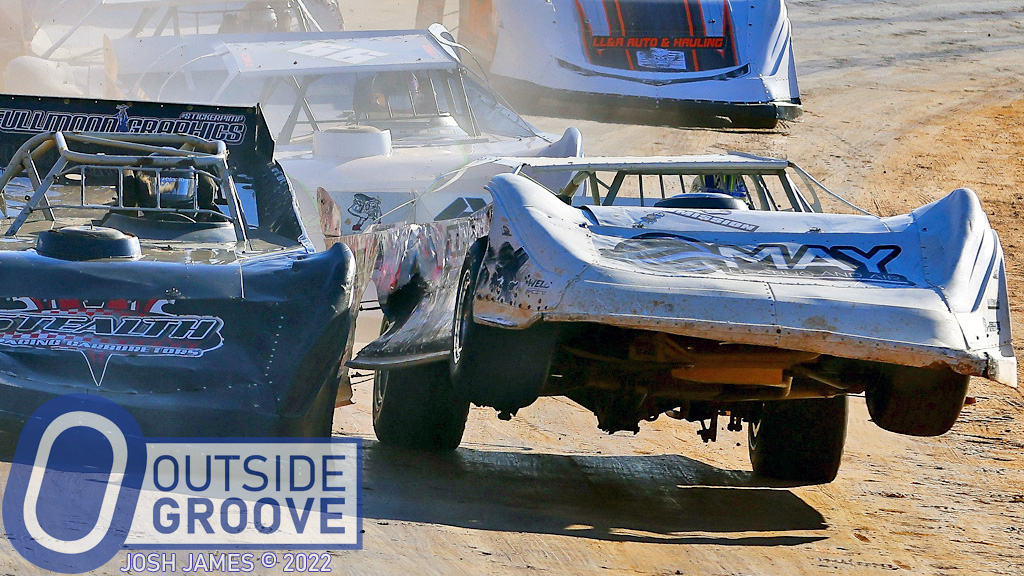 Payton Stevenson decided at the last minute to make a trip to Boyd’s Speedway for the Cabin Fever event last Saturday. That decision resulted in Stevenson receiving attention for his speed and this scene here during the 602 sportsman heat race at the Ringgold, Georgia, dirt oval.

“My right-front tire ramped up on the left front of the car next to me — I had no idea both wheels were in the air until I landed,” Stevenson, 17, of Locust Grove, Georgia, said. “We had just started the heat race and the inside was popping — the bottom line was more preferred. I went to the inside, and the driver next to me pushed me down even further. I don’t know who he was, because I’ve never raced there, I just knew he wanted that groove.”

Two wheels, four wheels, it didn’t matter for Stevenson — he had his eye on the prize.

“I held my foot on the gas, and kept racing,” said Stevenson. “I got around him on the next lap.”

Stevenson’s tenacity earned him a heat win. That put him on the outside pole for the feature.

His performance came in a 2014 Blue-Gray Rocket chassis. Stevenson and his father, Billy, purchased the car at the end of the 2020 season. Last year, he won four features, including the National 100 at East Alabama Motor Speedway in Phenix City. Stevenson also took home the points championship at Senoia Raceway in Georgia.

Back at the Cabin Fever event, Payton Stevenson finished runner-up to one of the winningest drivers at Boyd’s Speedway, Booger Brooks. (For more on Brooks, see “Booger Brooks: The Racer You Can’t Forget”.) The experience honed the young racer’s skills even further.

“Every weekend we are trying to get faster,” Stevenson said. “We’re competing with 30 to 40 602s every weekend at Senoia Raceway. We have our work cut out for us.”