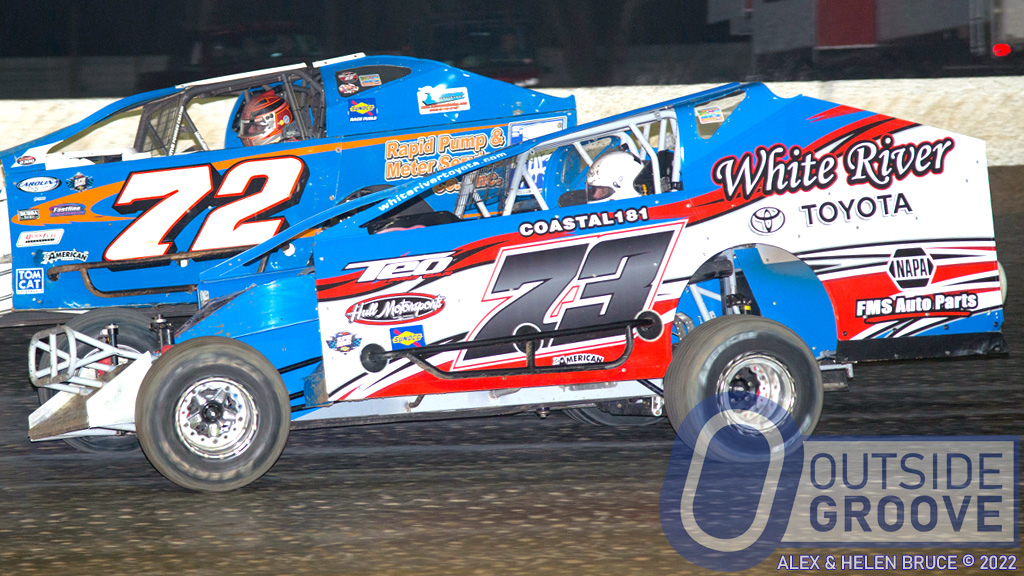 The 2022 season has already been an odd one for Kevin Chaffee (73). He’s not only racing a car with a color atypical for him (blue), but he also found himself disqualified in the tech shed. The incident occurred in the crate 602 sportsman class during the first night of the Short Track Super Series’ Sunshine Swing at All-Tech Raceway in Lake City, Florida.

First, he used blue for his car’s colors for primarily one reason — availability.

“There was a shortage of black aluminum,” Chaffee, 40, of Bradford, Vermont, said. “It was either blue or [Vermont] state truck orange, so I went with the blue. It turned out to look really good.”

In a twist of fate, blue may have foreshadowed Chaffee’s experience so far in Florida.

“It was awesome,” said Chaffee. “My crew was ecstatic and it was like a huge weight was lifted off my shoulders. We’ve been trying so hard to win outside of our home tracks.”

Unfortunately, Chaffee’s carburetor failed to pass the go/no-go gauges, which resulted in the loss of his hard-fought win. His carburetor, which he said has passed tech in DIRTcar sportsman competition numerous times, did not meet the specs of the Short Track Super Series rule book. The root of the cause of the DQ stemmed from a milled butterfly shaft.

“Disappointment,” Chaffee said of his initial reaction. “It’s my responsibility to know what the rules are, and I didn’t pay close enough attention. We got it fixed. I’m pretty determined. Now, that I got that first win, [although I was disqualified,] they say the second one comes easier. I hope that’s true.”

The second night did not go any better. Kevin Chaffee finished 26th, dropping out due to a bad vibration in the driveline. However, despite the string of bad luck, Chaffee still remains confident. With two nights remaining, he hopes he’ll crack into victory lane again and finally score that first win away from home.