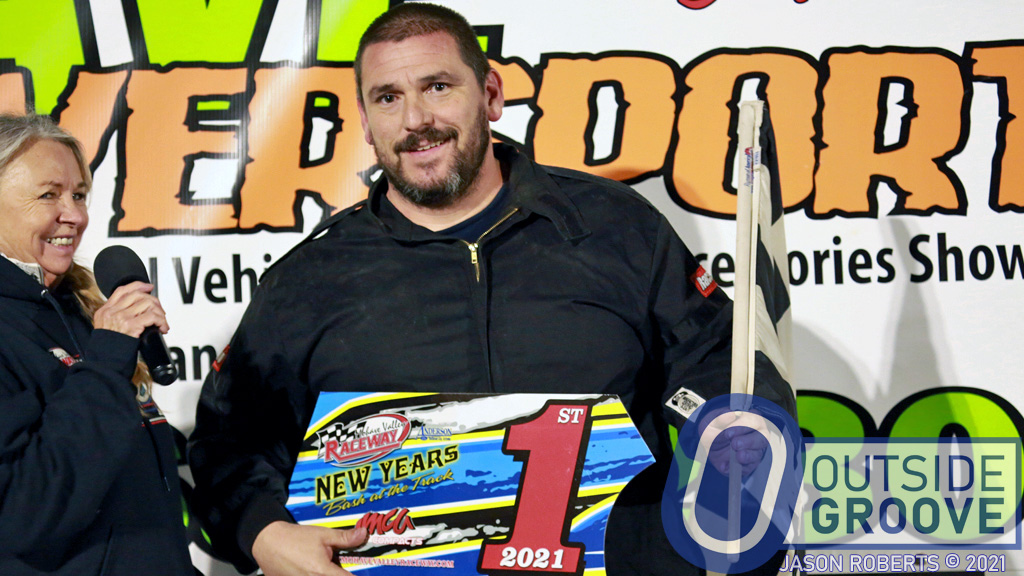 Ken McWilliams started the new year the same way he ended it — with a win. He scored IMCA sport compact feature victories on December 31, 2021, and January 1, 2022. Both came at Mohave Valley Raceway in Arizona.

“I finished my first year in the division the way most of the season went — with a win,” McWilliams, 40, of Menifee, California, said. “The momentum carried into the new year. We’re hopefully going [make a] run for the California IMCA state championship.”

McWilliams just started racing sport compacts last year. He had raced trailer figure 8s, where he won two championships (2016–17) at Perris Auto Speedway in California. The pandemic led him away from the figure 8 and toward the oval.

“Last year, because of Covid-19, Arizona had racing when California did not,” said McWilliams. “I was helping my cousin, Alyssa Smith, race her modified in Arizona, when I found a 2002 Chevy Cavalier for sale.”

McWilliams bought that car and started regularly making the four-hour trip to Mohave Valley Raceway. In his second night out in the division, he won. At the close of the year, he had seven victories in total, with four at Mohave Valley Raceway and three at Barona Speedway in Lakeside, California.

“The pressure was off when I won the last night of the year,” McWilliams said. “It gave me confidence for the New Year’s [Day] race. Both races were tough, but Saturday was tougher. I raced side-by-side, inches away from the door of the early leader, Chris Niemi. It was both fun and exciting.”

Mohave Valley Raceway races from September through May, taking a respite during the hot summer months in the desert. Regardless, Ken McWilliams is thankful for not only venturing to Mohave Valley Raceway, but also for his wins that ended and started the year off right.

“I made enough money to pay the gas bill this past weekend,” said McWilliams. “That’s what I call a good weekend of racing.”