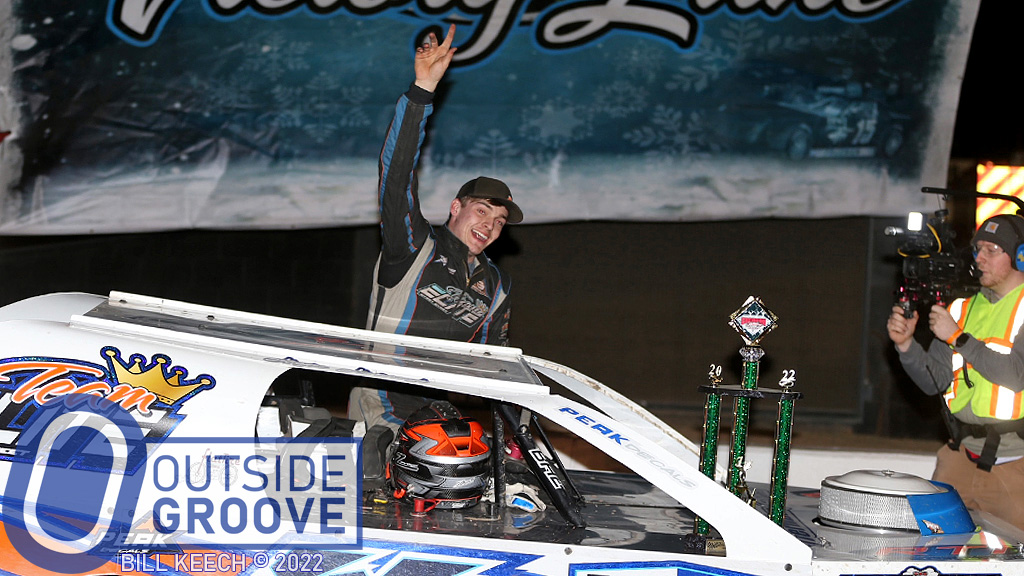 In his third night ever in an IMCA sport mod, Braden Richards found victory lane. He scored the triumph this past Friday during the IMCA.TV Winter Nationals at Cocopah Speedway in Somerton, Arizona.

For the past three seasons, Richards steered a hobby stock. He said his two biggest accomplishments include a win during the World Nationals at Marshalltown Speedway in Iowa, and a ninth-place finish during the IMCA Speedway Motors Super Nationals at Boone Speedway, also in Iowa.

“I want to eventually drive a modified,” Richards, 19, of Madrid, Iowa, said. “It was time to make my next move, to the sport mods. I feel I can learn a lot by driving a sport mod before a modified.”

Richards didn’t appear remotely near victory during his first two nights at Cocopah Speedway. On night one, he started 13th and finished 13th in the feature. The second night, he failed to transfer from the B-main. Nevertheless, the effort wasn’t for naught.

“Both of those nights, I learned a ton,” said Richards. “I made changes in the rear suspension and shocks to free the car up so it would rotate better.”

With a day job at Bob Harris Enterprises, Richards knew the changes he needed to make to his race car.

“I’ve learned every little thing about shocks working in the shock room with Bobby Harris,” Richards said. “We rebuilt and tuned shocks for a lot of racers.”

Richards also adjusted the way he drove the car.

“I found myself overcorrecting when steering into the turns,” Richards said. “I had to learn the difference between trail-braking and stabbing the brake to get the car through the turns. The hobby stock has an unaltered OEM steering box [with a 25:1 ratio] and the sport mod has a 6:1 ratio — that’s a big difference.”

The changes Braden Richards made netted him his first sport mod win. It came in a race that attracted 58 entries from all over the country.

“We never expected to have success so soon,” said Richards. “We went down there without expecting a win. Our main goal was to make the show. The win was a huge accomplishment.”

Richards’ time in Arizona has ended. He looks to pick up his winning ways in April, when he’ll compete in the Frostbuster races held at several tracks in Richards’ native Iowa.