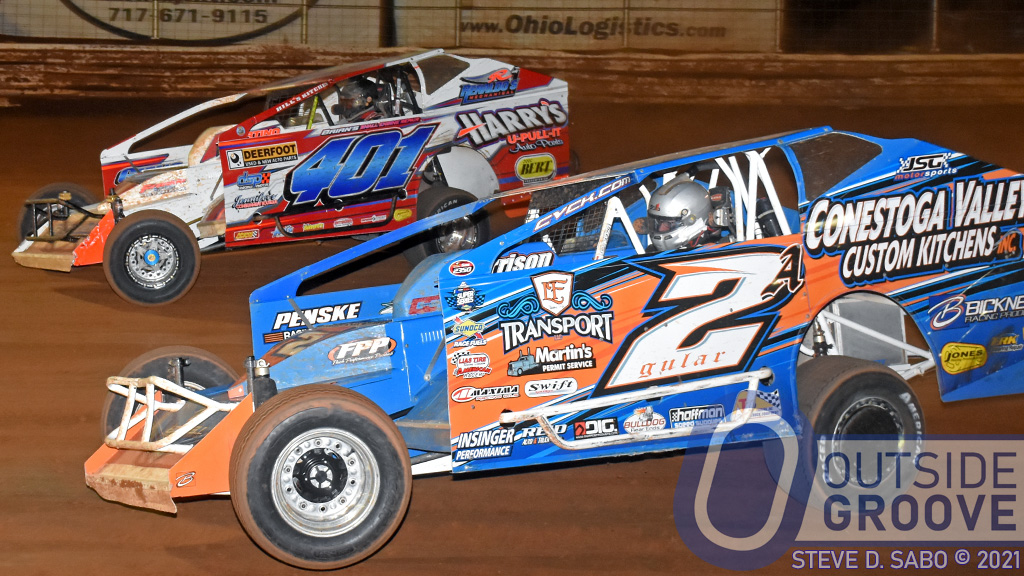 “Frank passed me with one to go — he won by a tire,” said Gular, of Frederick, Pennsylvania. “I could remember cheering Frank on at the Syracuse Mile when he won Super Dirt Week XXXVII [in 2008]. After all, he is a Pennsylvania guy. I never, ever, thought I would be at the level where I would be racing against him, let alone battling him for the win. It was an honor.”

At BAPS Motor Speedway last weekend, Gular once again had the pleasure of competing with Cozze.

“Frank was leading and we managed to get by him for the win,” Gular said. “We raced clean, and it was a thrill for me. I’m racing with legends in the world of dirt modified racing, and Frank is one of them. I used to watch these racers from a distance. Now, I’m talking with them at the tracks we race at.”

Mike Gular said he grew up admiring drivers such as Cozze, Billy Decker, Jeff Strunk, and Craig Von Dohren. Now Gular not only races and converses with them — he’s beat them several times. He started off the season with a win in January. It came during the Short Track Super Series’ Sunshine Swing event at Bubba Raceway Park in Ocala, Florida.

Gular followed that up with more victories.

However, his $5,000-to-win victory at BAPS Motor Speedway last weekend will resonate throughout the winter.

“It’s a huge win,” said Gular. “You want to end a season with a win because you are only as good as your last race. That win keeps you on top of your game all through the off-season, and gives you momentum for the new year.”