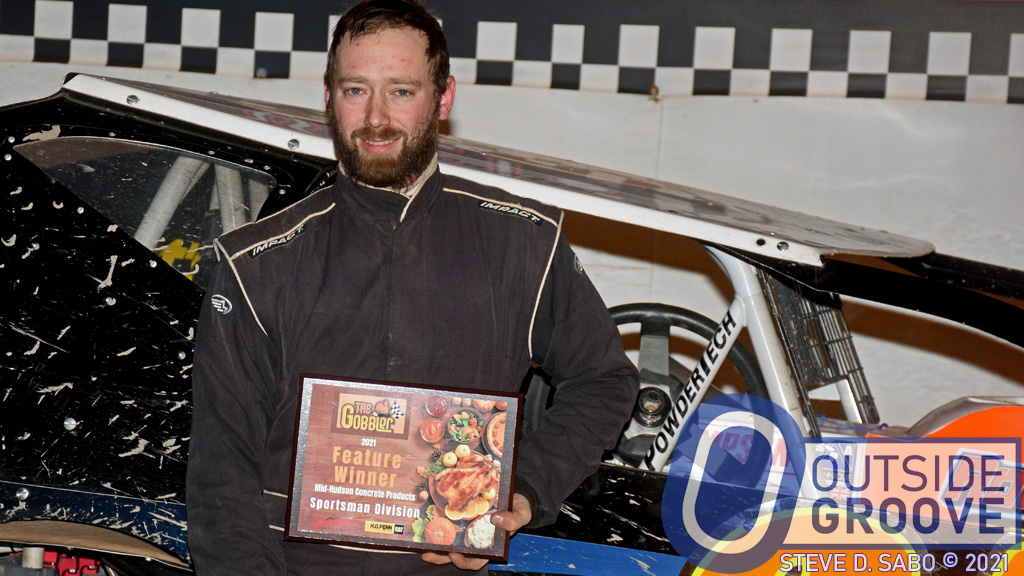 This past weekend Justin Comes tried something different. In fact, just about everything was out of the ordinary. He ventured to a new track for the first time — Accord Speedway in New York. Comes raced a different car. And, he competed on American Racer tires instead of his usual rubber from Hoosier Racing Tire. All that change might throw a seasoned racer, such as Comes, in for a loop. However, he walked out of Accord Speedway as the winner of sportsman feature at The Gobbler.

The Gobbler victory was Comes’ first of the year. He competed for the championship at Devil’s Bowl Speedway in Fair Haven, Vermont. Despite the lack of a feature win, he came close to scoring the sportsman crown.

“I was in the [points] lead going into the last race, and I had some mechanical issues with my car,” said Comes, 29, of Middlebury, Vermont. “We ended up losing the championship by a point — that was definitely hard to swallow. But, it didn’t just come down to the last race. To win a championship, you got to be good all year.”

After the season concluded at the Vermont dirt oval, Comes was still hungry to race a few more events.

“My girlfriend’s father, Terry Rouse, mentioned about a month ago about going to The Gobbler,” Comes said. “We didn’t have any American Racers … so I was back and forth about it. I told him, ‘If you can find some tires, I’ll make the trip.’ It was a last-minute decision on Wednesday of last week. [Rouse] called me up and said, ‘I got the tires. If you want to get the car, bring it to your house, and get it ready, we can make the trip.’ I’m definitely happy I decided to follow through with it.”

Justin Comes has been together with his girlfriend, Hailey Rouse, for three years. It can intimidate some to race for their significant other’s parents, but Comes said it didn’t seem any different than racing for any other car owner.

Devil’s Bowl Speedway deems itself a ½-mile oval while Accord Speedway is on the other end of the spectrum as a ¼-mile bullring.

“[Accord Speedway] is a tight ¼-mile bullring, with a lot of banking,” Comes said. “It feels like you’re going really fast, even though it’s so small. At Devil’s Bowl Speedway, you don’t realize how fast you’re going until something bad happens. Accord Speedway feels super fast, because you’re always up on the wheel.”

The American Racer tires Comes used may have helped him punch his ticket to victory lane.

“The tires I had borrowed, everybody was telling me they were too soft and they wouldn’t last,” said Comes. “But, that’s why I had so much more speed than a lot of other guys. We had more yellows in my race than probably the norm [and] it was probably 40 degrees out, so those soft tires really worked. We got lucky — those were tires that the guy had that let me borrow them.”

Justin Comes led from green to checkers, and finished his 2021 season with a win. Now he looks toward 2022.

“We’re probably going to take out [my girlfriend’s father’s] car as much as he wants to,” Comes said. “As far as my car, I’m going to try to win the championship at Devil’s Bowl Speedway.”