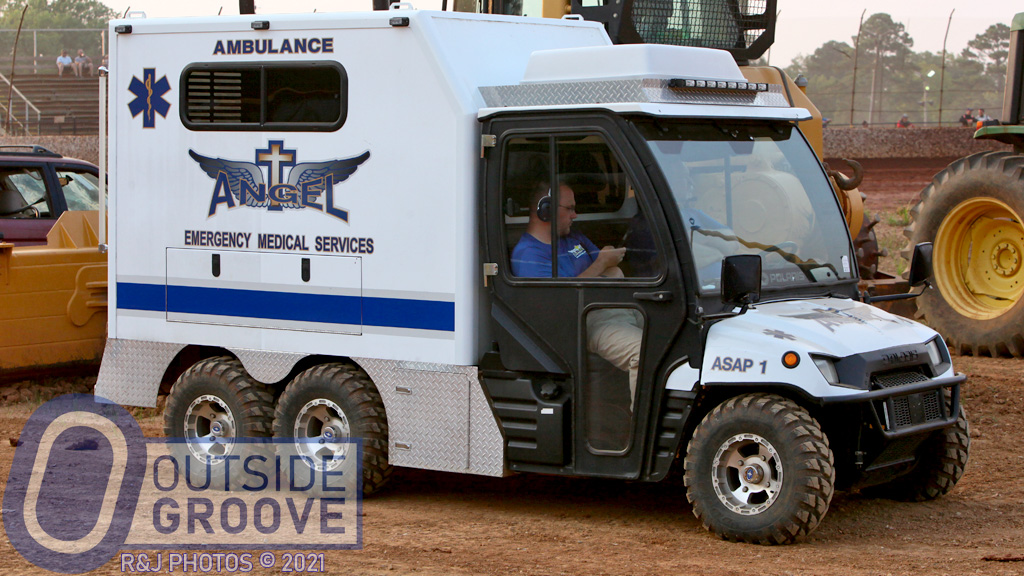 Angel Emergency Medical Services uses this ASAP UTV to address the medical concerns of attendees at events. That includes shows at a pair of Georgia dirt ovals they cover — Boyd’s Speedway in Ringgold and North Georgia Speedway in Chatsworth. The ASAP UTV offers one major advantage over a traditional ambulance when it comes to dirt racing.

“Even with four-wheel-drive ambulances, in those turns [at a dirt track], because of the angle, they’ll slide,” said Dewayne Wilson, of Angel Emergency Medical Services. “[The UTV is] a lot more stable. It’s six-wheel-drive. We can pull right up to the cars with the UTV, where we couldn’t with the ambulance. [With an ambulance,] we got to [have the ambulance] stay at the bottom of the track, get a stretcher, treat somebody, and walk up and down the hill. We can point that UTV sideways, point it downhill, or whatever, and it’s going to stay stationary. It’s a whole lot safer.”

The size of the ASAP UTV provides another benefit.

“Anywhere a golf cart can go, it will go,” Wilson said. “It’s easy to get around the stands, the infield … in-between car haulers … and anywhere we need to go.”

Alternative Support Apparatus (ASAP), of Ohio, built the modified Polaris UTV. Despite their outward appearance, the ASAP UTV offers just about everything you would find in a conventional ambulance.

“They’re heated and air-conditioned,” said Wilson. “They have a generator on them. The back is about the same size as a van ambulance. We have the same amount of supplies as a regular ambulance.”

The only limitation is the UTV maxes out at roughly 45mph. That means another vehicle must transport the patient — but that’s not necessarily an issue, according to Wilson.

“We’ll treat and the local 911 provider will transport,” Wilson said. “As soon as we assess the patient, we’ll make the call [to the transport provider]. By the time we treat the patient, get them into our vehicle, and take them outside the track, the [transporting] ambulance [will be] outside. It actually speeds up the patient care and transfer to the hospital.”

“We were taking the ambulance and the UTV out [to dirt tracks] for a little while and we found out the UTV was a whole lot more conducive to [the sport],” said Wilson.