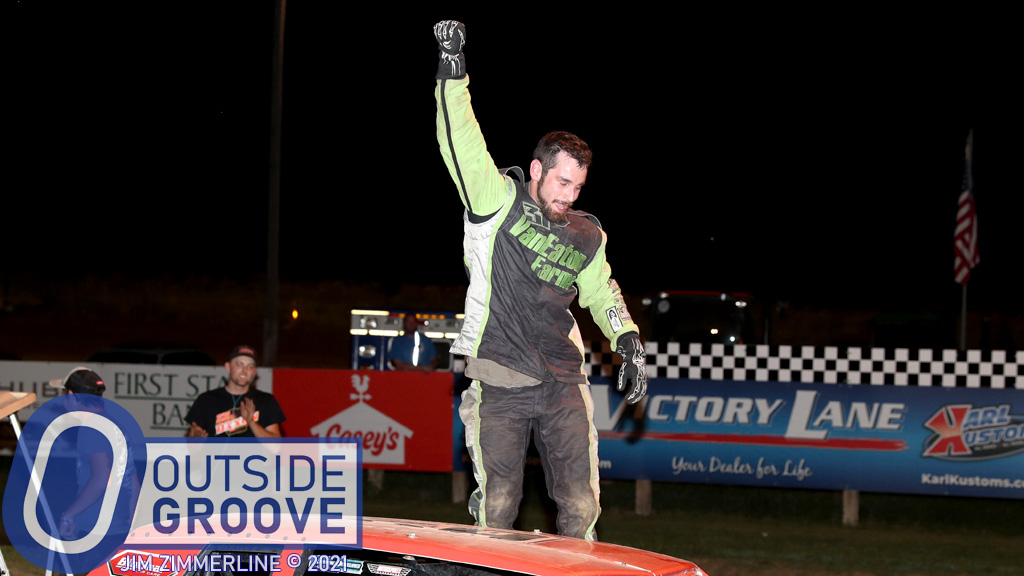 When the team’s regular driver couldn’t make it, mechanic Matt Avila slid into the driver’s seat. He did so with success, taking wins at a pair of Iowa dirt ovals last weekend. He won in the stock car class at Adams County Speedway in Corning and Stuart International Speedway.

For the past four years, Avila has worked as a full-time mechanic on the cars owned by Todd and Traci Van Eaton. Johnathon Logue typically drives the stock car for them. (See “Johnathon Logue: 71st Victory, 1st in Stock Car”.)

“When Johnathon has been busy racing his sport mod, the Van Eatons offered the stock car for me to drive,” Avila, 24, of Fontanelle, Iowa, said. “I always wanted to drive, but I enjoy working on race cars so much that there was little time to drive. Then, I got a taste of driving when I hot-lapped Todd’s cars. It was a cool feeling to drive the race car I worked on, so I jumped at the opportunity to race.”

Prior to this year, Avila never competed in a stock car race. Avila steered the stock car 14 times this year, earning several top-fives prior to the two wins.

For the rest of the season, Matt Avila remains on standby.

“I’m a day-by-day driver,” Avila said. “When my work is done and a car is available, I may be asked to jump in a drive.”

With now experience behind the wheel and well as the wrench, Avila said many ask him if races are won in the shop or on the track.

“I’m proof that it takes both,” said Avila. “Great maintenance and preparation and the driver’s ability to understand his car and drive it is necessary to win.”