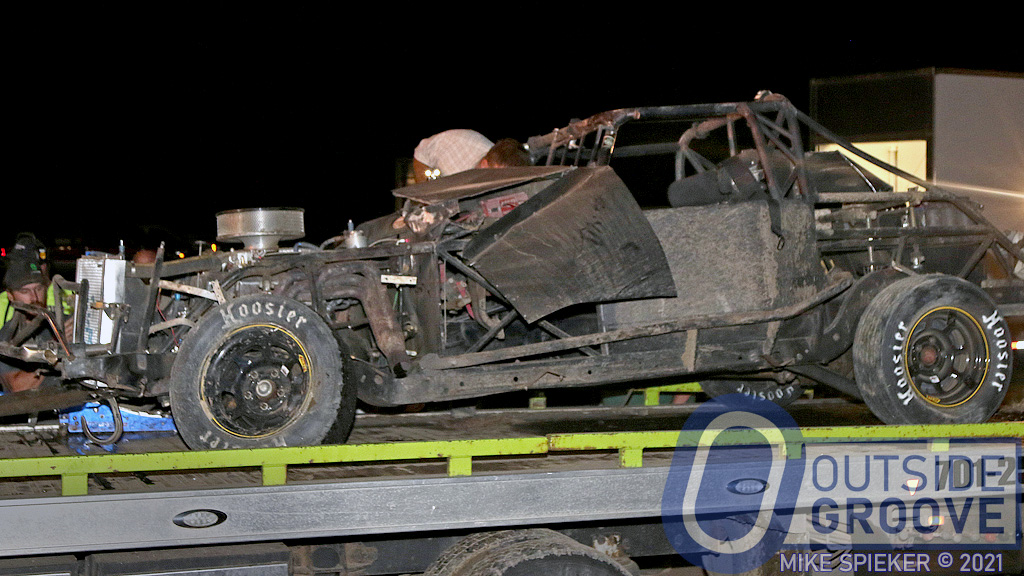 IMCA stock car driver Jordan Zillmer flipped after taking the checkered flag for the win. He did so not in the same fashion as retired NASCAR Cup Series driver Carl Edwards would have done. The incident totaled his race car at the Dakota Classic Modified Tour opener for the stock cars at Jamestown Speedway in North Dakota.

“After the checkered flag, I stepped on the throttle — sort of a ‘woohoo’ moment,” Zillmer, 32, of Cleveland, North Dakota, said. “A couple seconds later, I took my foot off the throttle and I was still on the chip.”

Zillmer said he panicked. He had a double-roller gas pedal and could have lifted it with his foot. Instead, he chose a different method to slow down his car.

“I was in the air when I hit the kill switch,” said Zillmer. “All I could do was hang on as my car flipped off the first turn four times. I was in a dust cloud and couldn’t see what was happening. [I didn’t know] if I was upside down or right-side up or where I was going. Then, suddenly, I landed on all fours.”

Zillmer emerged from the wreck unscathed.

“I told [the safety crew] I must be younger than I am, because I’m not hurt,” Zillmer said. “I wasn’t even sore the next day.”

He sat in an Ultra Shield Race Products VS Halo full-containment seat, with a five-point harness from Pro 1. He wore a G-Force Racing Gear helmet paired with a HANS device.

The car, which was built by Sniper Speed, suffered bent chassis components on the front and rear. Zillmer said repairing the chassis wouldn’t be worthwhile.

Jordan Zillmer, a farmer, took the entire week off to race in the stock cars’ portion of the Dakota Classic Modified Tour.

“Since I had the week off, I [brought] the car to Sniper Speed,” said Zillmer, who bought a new car while at Gillett, Wisconsin, car builder. “We’re getting [the new car] ready to race this weekend. I’m happy with Sniper Speed. After my experience [at Jamestown,] I feel their chassis are the fastest and safest that money can buy.”