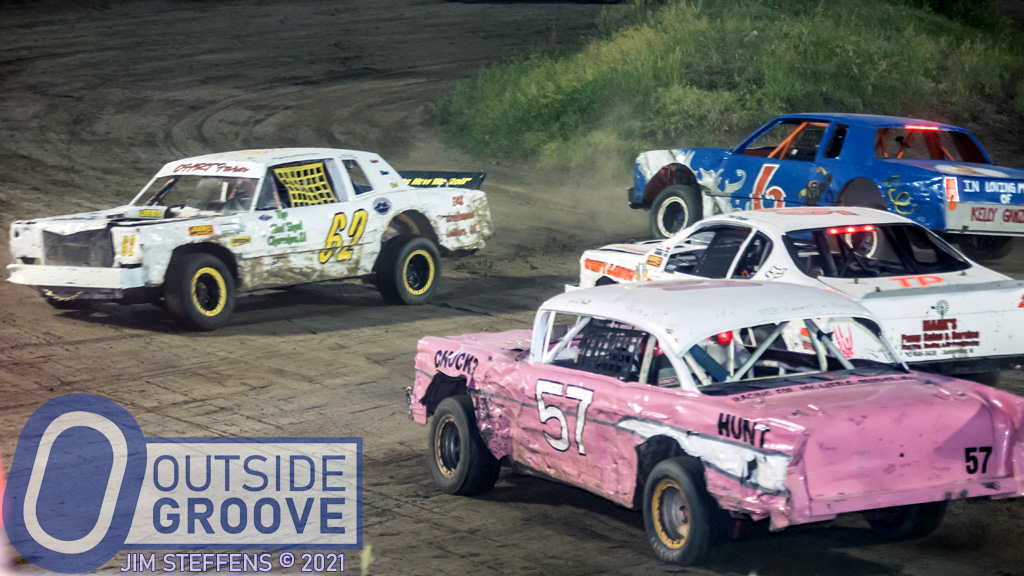 From May through August, fans and racers head to the Primghar Iowa Jaycees Figure 8. Just over 900 people live in Primghar, a town in the northwest corner of Iowa, where many farm the rich black soil to produce corn and soybeans. The track offers affordable, action-packed entertainment that finishes at a decent hour. Plus, proceeds from the track’s events go back into the community, through the local chapter of the JCI USA, aka United States Junior Chamber or Jaycees.

The Jaycees first put on figure-8 racing at the O’Brien County Fair back in the 1970s. Its popularity grew to where they added races year after year. These days, the Primghar Iowa Jaycees Figure 8 runs a semi-regular schedule through the summer, with events mostly on Fridays or Saturdays. It costs $5 for adults, $3 for children 12 and under, and kids four and under are free. To enter the pits, it costs only $10. The two-division shows typically start at 7:00 to 7:30 p.m. and end by 9:30 p.m.

“The races draw a crowd — the bleachers have been expanded several times,” Joe Hunt, a 10-time track champion from Granville, Iowa, said. “It’s inexpensive entertainment for the whole family. The townspeople are excited for each race — and they don’t want to miss a single one.”

The Action Behind the Attraction

“Surviving a figure 8 race depends upon the ability of the driver to look ahead,” said Hunt. “Look into the north corner when you come out of the south. Get used to how fast the other drivers are and how they handle the X. The key is to time it and never stop.”

The rule book requires northbound cars to yield to southbound cars at the intersection. Officials black-flag drivers violating the rule.

“We’ve had a few wrecks and a lot of close calls in the center of the track,” Hunt said. “I keep [the gas pedal] to the wood. You can hear the crowd go ‘ooohhh’ when the cars almost hit.”

“In the old days, we ran big Impalas, with mud and snow tires,” said Hunt, who started racing in 1981 and races in the Primghar class with an authentic 1957 Chevrolet body on a GM Metric chassis. “You can use any year chassis you want — even older frames and station wagons. Nothing is outlawed, except pickups trucks and ¾-ton suspensions. And, now we salvage used Hoosiers and American Racers from stock car or modified racers.”

The Primghar class mandates restrictor plates on their engines and automatic transmissions. The stock class prohibits any tuning, but drivers can opt for a manual or an automatic.

This season, the Primghar class averages 35 to 45 cars a night while the stock class typically gets 20.

The races raise money for the Jaycees, which they return to the community of Primghar. Their programs include a basketball clinic for grades three through eight, an Easter egg hunt, youth soccer, and scholarships for high school students at the South Community School District. The Jaycees even have a program where they visit local homes to fill kids’ sandboxes.

“The races are the main resource for the Jaycee’s community projects,” said Jaycees treasurer Kelly Einck, 25, who works as a service manager at a John Deere dealership. “The program is run by all volunteers. Jaycee membership is for young professionals ages 21 to 40. We have 25 members, but members who age out still come to the races to help and we welcome them.”

Drivers receive their payout based on a points system that works off a percentage of the front and back gate attendance. They earn points by how they finish in their heat and feature. A trophy dash awards additional money. Some nights a point may be worth $1.25, other events it could be $1.40. A win awards 100 points, a heat race victory 25 points.

Stock class driver Payton Steffens has attended the Primghar Iowa Jaycees Figure 8 races since he was three years old. Last year, he purchased a 1999 Oldsmobile Alero to make his debut this season.

“I bought a cage from an A-mod and installed it into the Alero and went racing,” Steffens, 22, of Primghar, Iowa, said. “I’ve gone through four engines, though. I’ve picked up engines for less than $200 each.”

Luckily, Steffens found an aftermarket hobby stock radiator solved his engine woes. He keeps his car at the loosely formed team of Ohrt Farm Racing. The team, owned by racers Daniel and Karlee Ohrt, has eight cars in its stable— a stock car, a hobby stock and six figure-8 cars, with two in the stock class, three in the Primghar class, and a spare for the Primghar division.

“Back at the farm, we all help one another,” said Steffens. “It’s a racing family and we all learn from each other.”

Hunt brought his son, Kyle, 26, and two daughters, Haley, 30, and Vanessa, 24, into the sport he loves. The four Hunts race at the Primghar Jaycees Figure 8.

“I consider myself very lucky,” Hunt said. “Racing figure 8 has given me so much family time. It’s time spent having fun with my kids, no matter how old we are. Nothing is better than that.”

Outside Groove Note of Transparency: Payton Steffens, quoted in this article, is the son of Jim Steffens, who provided the photography for this story.