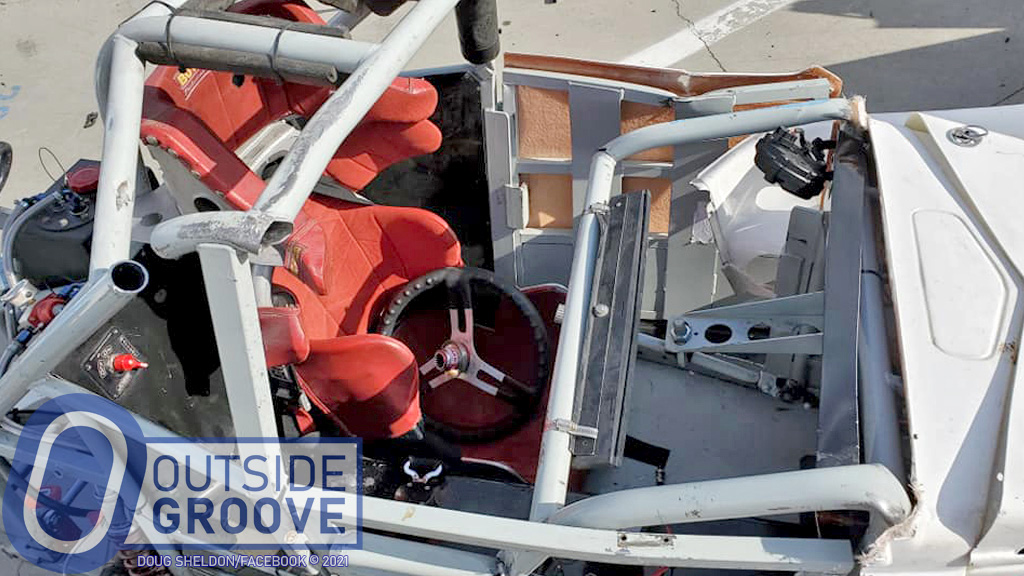 When Lance Mackey wheel-hopped another car, it shot him straight into the frontstretch wall, roof first. The wild accident occurred during a B-main for the Legend Cars at the Wenatchee Valley’s Super Oval in East Wenatchee, Washington. Fortunately, Mackey walked away.

From the Driver’s Seat

“I remember going inside a car to pass it, and remember our cars caught tires,” said Mackey, who hails from outside of Fairbanks, Alaska. “The last thing I remember was flying through the air. From that point on, I don’t recall anything.”

Lance Mackey watched the video of his crash over and over again.

“I saw myself walking around, and everything looked fine,” Mackey said. “I seemed coherent, but I didn’t remember anything [until] being in an ambulance. When I went to the hospital, they tested me for a concussion, but they determined I did not have one.”

Mackey sat in a ButlerBuilt full-containment seat, with a Simpson five-point harness. He wore a RaceQuip helmet, with a HANS device.

“People had all kinds of opinions, but in the end, I was the one sitting in the car,” said Mackey. “I got out on my own…. I got bumps and bruises, which can be expected in a racing crash.”

Wenatchee marked the fourth weekend Mackey competed with the car. He purchased his ride used from US Legend Cars dealer Robert Gayton Racing in Albuquerque, New Mexico. The dealer’s namesake, Robert Gayton, said they conform to all the rules set by US Legend Cars.

“All chassis come from US Legend Cars,” Gayton said. “The cages are all built from the same DOM 1-1/4″, .120″-wall tubing, with the same gussets, all welded in the same way. The rules are stringent. You cannot add gussets or bars or any other material nor take material away on a Legends Car.”

Three weeks after the crash, Gayton received Mackey’s car for inspection. Some social media pundits blamed the tubing, others the welding. Gayton found neither to blame.

“It was shear forces that cut the tubing,” said Gayton. “The tubes broke at the B-pillar, causing the A-pillars to collapse. Because it was a huge impact, at an exacting angle, the concrete sheared the tubing. I’ve only seen this happen to a sprint car that had chromoly tubing, never to a Legend Car.”

However, Gayton said you want some give with a chassis.

“If you built a car strong enough to prevent shear, it would transfer the load [of the impact] to the driver,” Gayton said. “That much force could kill a driver. From IndyCar and their analysis of crashes, we learned that it is best to dissipate energy.”

Gayton said US Legend Cars designed its cars to safely absorb an impact.

“The cars have crush zones under the body, on both ends and sides,” said Gayton. “The cage surrounding the driver is very strong. Notice that the halo around Lance’s head and the cage around his seat are intact. The front of the roof and windshield area is made not as strong as the halo [but] there is more tubing around the driver’s head.”

Gayton said the shearing of the windshield bars could have resulted in an arm injury. Mackey grips the wheel at its bottom because of his left index finger being amputated.

“If it was me driving in that crash, I could have broken both arms because I grip the wheel at 10 and two,” Gayton said.

Lance Mackey knows how to survive. He beat cancer, won the Iditarod Trail Sled Dog Race four times, and now walked away from an incredible Legend Car wreck. Mackey plans to rebuild his wrecked Legend Car and continue racing in Washington state and his native Alaska.

“I’m no stranger to danger — it is part of my life,” said Mackey. “I’m going to get back on that horse and ride it. I was born to race — whether it is behind a team of dogs or seated in a Legend Car.”

Outside Groove Note of Transparency: After repeated attempts, US Legend Cars was unable to be reached for comment.