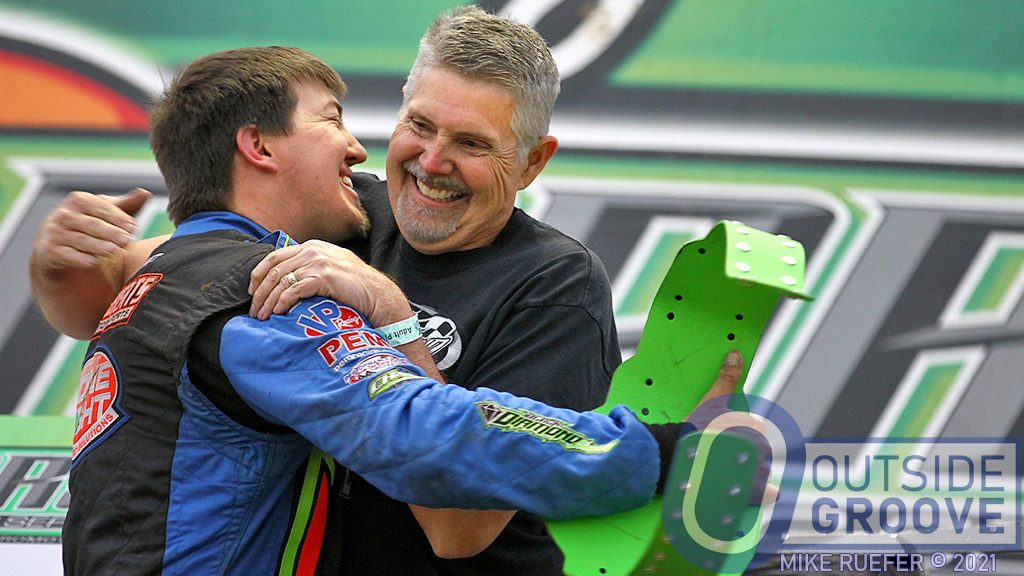 Late model driver Garrett Alberson celebrated one of his biggest wins with car owner Ken Roberts. He scored the MARS Racing Series’ Thaw Brawl victory at LaSalle Speedway in Illinois last weekend. The win represented the culmination of the efforts of several car owners who had believed in Alberson throughout his career.

Just What the Doctor Ordered

“I was just a kid from New Mexico with not a whole lot going on,” Alberson, 32, originally of Las Cruces, said. “Dave helped me find my way in the racing world.”

Deetz encouraged Alberson during his formative years in the sport.

“It was 2013 — we had MasterSbilt chassis, but we bought parts from Ronnie Stuckey in Louisiana,” said Alberson. “Dave cold-called Ronnie and asked him if I could hang out at his shop to learn about late models.

“It was originally going to be for a week or two, but he was just starting Black Diamond [Race Cars] and needed help. Dave then bought a used car from Ronnie, which further built our relationship with him.”

Deetz urged Alberson to look beyond the Southwest. Alberson entered the 2014 Pelican 100 at Ark-La-Tex Speedway in Vivian, Louisiana. He made the show the first time out.

“I went back to Ronnie’s shop to hang out for a week,” Alberson said. “Ronnie then offered me a job. He wanted to help me and keep me driving.”

While working at Black Diamond, he raced for Raymond Childress, of Haughton, Louisiana, before they shut down at the end of 2017.

“I had a tough decision to make,” said Alberson. “Do I look for another ride? Ronnie was about to have a house car team with Earl Pearson Jr. driving.”

Transitioning from Driver to Crew Member

Stuckey offered Alberson a position with Pearson as his car chief.

“I felt that as a driver, I was lacking a few pieces of the puzzle to break into a higher level of driving,” Alberson said. “The opportunity to be around a high-caliber driver was one I couldn’t pass up.”

“I learned more than anyone can fathom,” said Alberson. “The knowledge kept on coming as I went along.”

At the end of his second year with Pearson, Alberson still longed to race.

“I was getting behind as a driver,” Alberson said.

One Helping Hand Helps Another

Ken Roberts was a customer of Black Diamond Race Cars, where he befriended fabricator Mike Humphrey. In April 2017, Humphrey was tragically killed in a car crash.

“Ken had Jeremiah Hurst [of Dubuque, Iowa] as his driver,” said Alberson. “I ended up in Humphrey’s role with Ken. The more we talked, the more we became good friends.”

Roberts put Alberson in touch with a car owner in Wisconsin. However, when Alberson started hanging out with Roberts’ team, another door opened.

“Ken decided his team could use my experience,” Alberson said, “and he would let me drive his second car.”

Racing with a New Team and Teammate

Garrett Alberson had raced for a two-car team before, which helped Roberts’ operation grow from its one-entry operation.

“Sure, there was a period of adjustment,” said Alberson. “The first night we ran together, Jeremiah and I crashed into each other.

“The most important thing is that they did not give up on me.”

“I’m learning a lot from Jeremiah,” Alberson said. “We’re opposite personalities, which is good. He’s super intense and passionate. I tend to be laid-back and less emotional.”

This season, Garrett Alberson hopes to give his teammate a run for his money for the 2021 MLRA crown. Regardless of the results, Alberson remains thankful for the car owners he had raced for.

“There are people you drive for, and those that you drive for that take an interest in what is going on in your life,” said Alberson. “Dave was a great mentor to me. Ronnie gave me the opportunity to grow. Now Ken is a great mentor. Like them, Ken is a die-hard racer.  He enjoys seeing the people around him grow, learn to be better at what they do, and eventually become the best at what they do.”