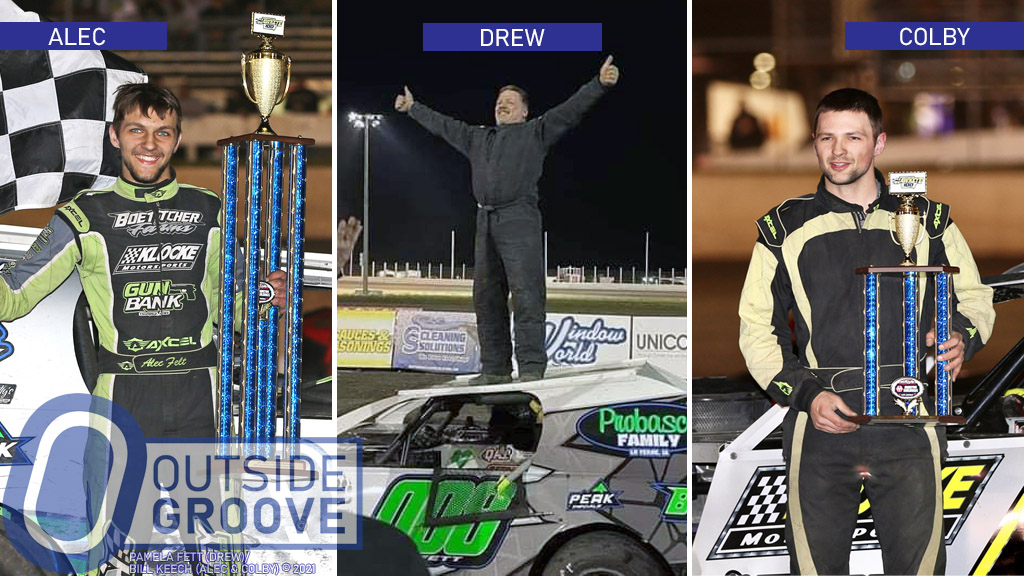 Drew, a winning hobby stock driver in the 1990s, gave up his career to see his sons succeed. When Drew built a backup car for them out of cast-off and swap-meet parts five years ago, they convinced him to drive it.

“They thought it would be pretty neat to have me out there with them,” said Drew, 57, of Thompson, Iowa. “I decided I better get into a sport mod and experience what they were experiencing — just to keep myself from being too critical of their driving.”

“The boys told me I would win someday,” Drew said. “I see it as a miracle. I’m old, the car is old, the engine is old, and I’m running against class acts in that division.”

Alec finished second to his father.

“Seeing Dad’s first win in a sport mod right in front of me was something not many drivers have a chance do,” said Alec, 21, of Burt, Iowa. “I had tears in my eyes on the last lap. He enjoys racing and enjoys knowing his sons are racing.”

As Drew won at Hancock, Colby took the trip to victory lane at Boone. Typically, the Fett Family — Drew and his sons — all race together.

“It is the most fun a driver can have when he’s racing with his brother and his dad,” Colby, 29, of Algona, Iowa said. “It really is a special night when all three of us are together. Not too many racers can have that.”

On Saturday, Alec joined his brother in the sport mod class at Boone. Drew opted to serve as crew member for his sons.

“Winning Friday night was great because there was a field of more than 40 sport mods and it was a chance to race in front of the World of Outlaws racers,” Colby said. “On Saturday night, I broke down, but Alec won by a straightaway. Afterward, people were shaking their heads, saying, ‘If one brother can’t do it, the other can.’”