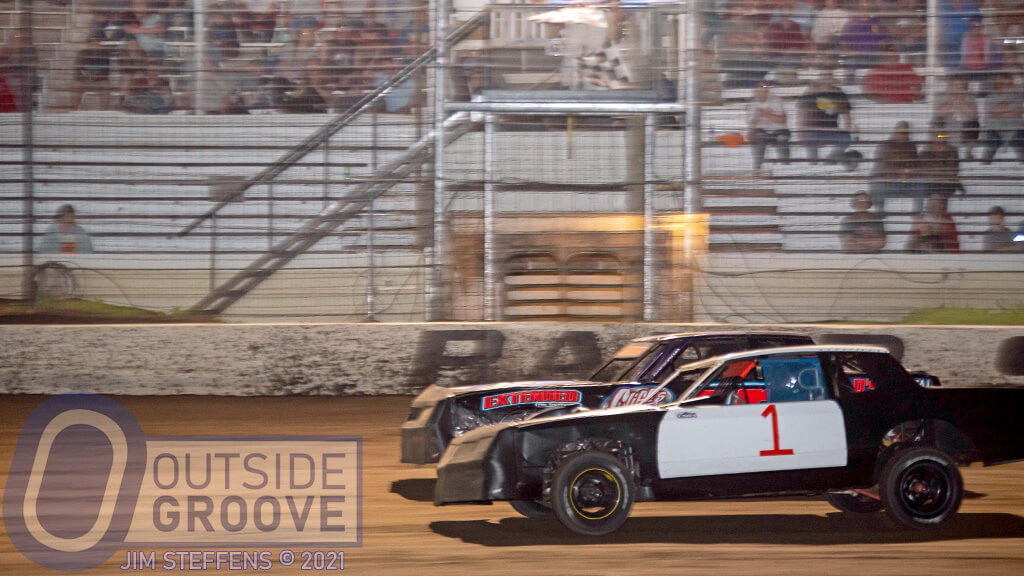 Chad Lonneman (pictured on the outside) crossed the line first in thrilling fashion. He beat Dustin Gulbrandson (pictured on the inside) by .003 seconds at the line during the USRA stock car feature at Rapid Speedway in Rock Rapids, Iowa. After the victory lane celebrations, Lonneman experienced a twist of fate, losing by ¼” in tech.

The night begun with Lonneman on the outside pole and Gulbrandson starting deep in the field, taking the green in 15th. While Lonneman commanded the lead, Gulbrandson made his way through the field. The two drivers cut their teeth together in the sport.

“Me and [Dustin] go way back,” said Lonneman, 33, of Adrian, Minnesota. “We have raced hobby stocks against each other for six, seven years [prior to racing stock cars]. The best thing about Dustin is we race each other as hard as we possibly can. We’ve never wrecked each other all the years we’ve raced. It’s fun racing against Dustin.”

During closing laps of the feature, Gulbrandson and Lonneman duked it out as they have for over a decade.

“For probably [the last] three laps, we were pretty much side-by-side,” Lonneman said. “He got underneath me. He took my line away, so I took a different route.”

When they crossed the finish line, the transponders determined the margin of victory as .003 seconds, with Lonneman the victor.

“I didn’t know [if I had won as I crossed the finish line],” said Lonneman. “I knew it was close. It was an exciting win … and then we got into the tech shed.”

In was in tech where Chad Lonneman lost the race by fractions. USRA stock car rules allow up to one inch difference in wheelbase between the left and right sides. Lonneman measured ¼” beyond that. The win then went to Gulbrandson.

“Something in the front end must have gotten bent the previous weekend,” Lonneman said. “[The wheelbase] might of [made a difference with the finish], but I don’t think it would have. With the picture I seen, it couldn’t have been more than two inches [between the two cars at the line].

“I’ve raced probably 400 to 500 nights of races, and I’ve been disqualified maybe two or three nights. You always got to push the envelope as far as you can. The nights that you get disqualified on something that you’re not pushing it on — the things you didn’t even know about — those probably sting the worst. That’s part of racing, though — you got to have everything completely up to snuff.”