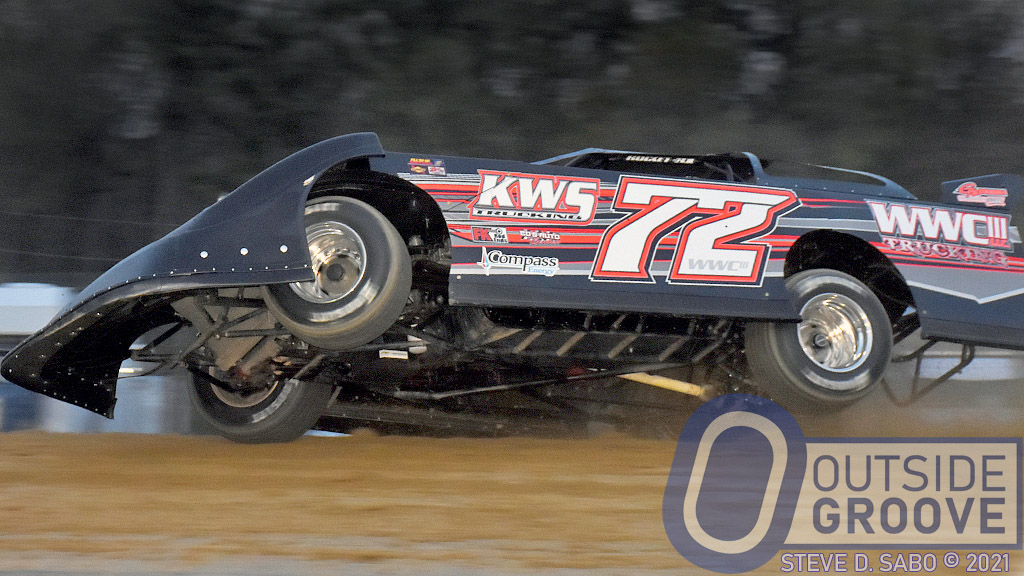 Commanding a new Rocket requires some getting used to, as seasoned Rocket pilot Trevor Collins found out. Collins steered a brand-new Rocket Chassis late model at Georgetown Speedway in Delaware. He nearly lost it in the third turn of hot laps for the RUSH Dirt Late Model Series event.

“I got a little too high on the track and the right front didn’t hook into the track,” said Collins, 22, of Seaford, Delaware. “Luckily, I was able to fully recover, and make the feature. We finished fifth [after starting 16th in a field of 48 cars] on the first night in a new car. It wasn’t all that bad.”

Collins earned the RUSH late model track championship at Georgetown last year in a Rocket Chassis car. Since his new ride wasn’t ready yet, he used his old car for the Georgetown Speedway’s first race of 2021 — and won it.

Prior to steering dirt late models, he raced on pavement. However, the hours-long hauls to paved ovals wore on him.

“Ever since I switched to racing on dirt [four years ago] there is less time on the road, and more time to have fun at the racetrack,” Collins, a parts man at a local Ford dealer, said. “The long trips to the pavement tracks were a pain.”

His experience on pavement wasn’t for naught, though.

“Crate-powered dirt cars [such as RUSH dirt late models] require that the driver keeps his momentum up,” said Collins. “If you break the momentum, a dirt car becomes a rock. I remember what they said in pavement racing, ‘If you lose a little momentum, you lose a lot.’”

Trevor Collins plans to continue racing closer to home, whether it’s Georgetown Speedway or Delaware International Speedway in Delmar. Nevertheless, the occasional trek off the Delmarva peninsula isn’t out of the question, such as to Virginia Motor Speedway in Jamaica.

“We’ll try different tracks this year,” Collins said, “but we will definitely be defending our title at Georgetown.”