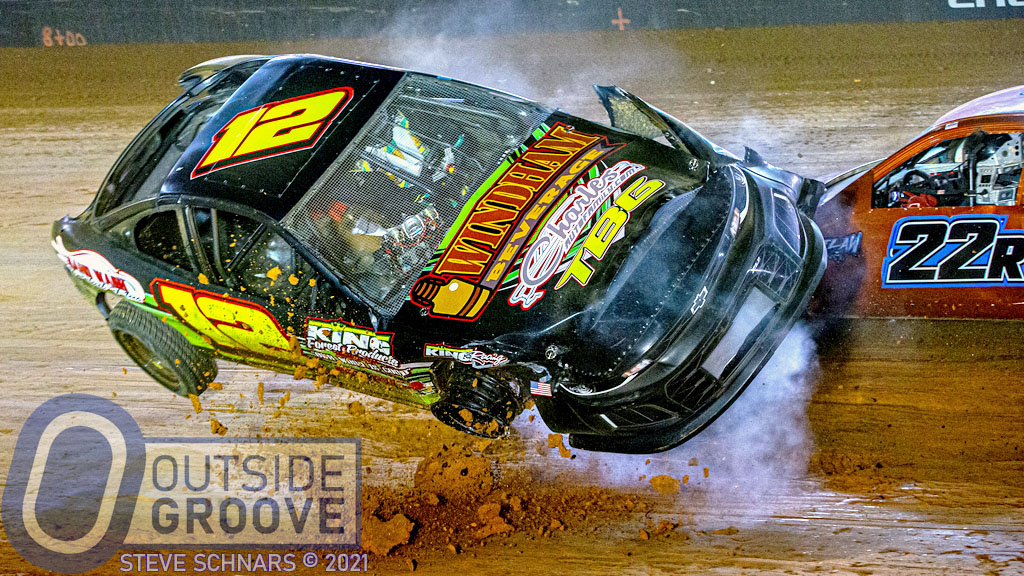 As Phil King found out, things happen in a hurry at Bristol Motor Speedway in Tennessee. All it took was a momentary lapse in concentration during the Bristol Dirt Nationals to result in destroying his brand-new Pontiac Sunfire hornet.

After setting fast time in practice, King worked his way through qualifying to accumulate enough passing points to start the main in 12th. In that race, he made his way to second with three laps to go, and then tragedy struck.

“My helmet fogged up,” King, of Windham, Ohio, said. “I couldn’t see and I had no tear-offs left. I had to open up my visor. I slowed a little and I got swarmed by cars.”

King checked up when he saw one car come down on him as they tried to pass King’s car.

“I hit the brakes, and when you do that in a front-wheel-drive car, you lose your steering,” said King. “I got hit from behind, got launched airborne, pushed into the wall, and hit again in the driver’s-side door about nine seconds after the caution was thrown.”

The accident destroyed his car. King hoped to save the 2.4L engine built by MWR Technology, but could salvage not much else.

Fortunately, King walked away from the crash, thanks in part to his attention to safety.

“A big part of keeping me safe in a high-speed wreck like this one was having a custom cage kit from Dickinson Cages,” King said. “The cage held up perfectly. It being tailored to the model of the car makes it more robust.”

Phil King races regularly at Michaels Mercer Raceway Park in Pennsylvania, where he won three features. He hoped to use that car at Bristol to compete in SCDRA (Sport Compact Dirt Racing Association) events.

“I still have last year’s car, a [Chevrolet] Cavalier, to race locally,” said King. “I am going build another SCDRA car. I’m picky, and I must have a Sunfire. Finding one that is rust-free is not easy in Ohio. I’ve got until the end of May. The first race is at Ohio Valley Speedway [in Washington, West Virginia].”