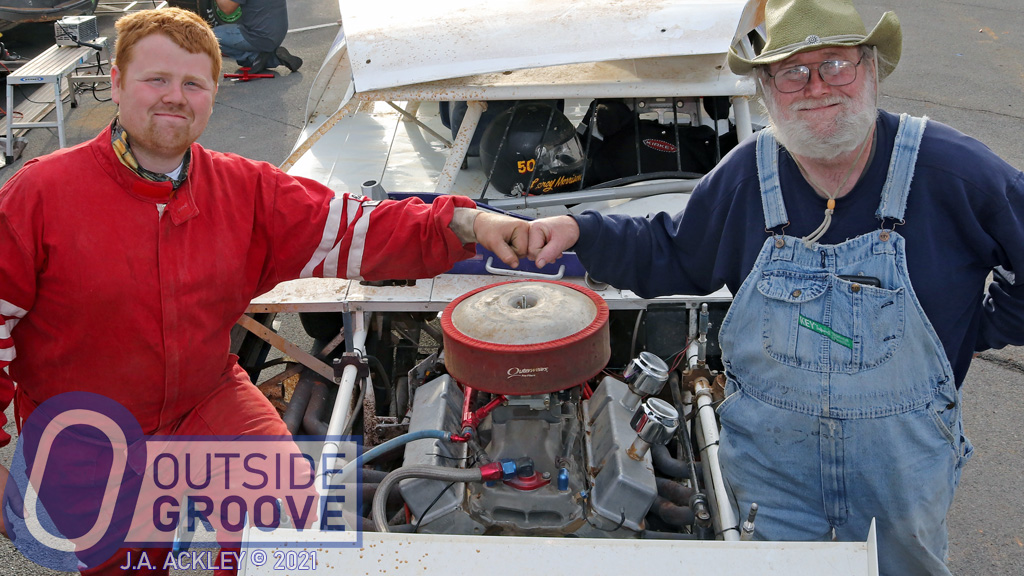 Armed with a homebuilt engine and a 2007 Hughes Racing Chassis car, Leroy Morrison and his father, Curtis, ventured to the Bristol Dirt Nationals. Despite the Herculean challenge of racing against well-heeled teams, Morrison welcomed the trip.

“I had seen [registrations] open up,” said Morrison, of Raymore, Missouri. “I had enough in my bank account. This would be like a dream come true to come to Bristol.”

So, Morrison signed up. He had an open modified … and a pure stock engine.

“We had a little pure stock engine, but it would have done nothing out here with these guys,” Morrison said.

Enter a friend of the family.

“A friend of my dad’s, Tom Elliott, had the block sitting in is basement for about 25 years, freshly redone, all in plastic,” said Morrison. “He was like, ‘You’re going to Bristol, right?’”

“Another friend of ours, Greg Clemons, out of Raytown, Missouri, he had a set of Brodix heads and a Brodix intake,” Morrison said. “He said, ‘Come take them off my late model. You can use them.’”

Paul Carter, of Kearney, Missouri, gave them carburetor. Then, Brian McConville, of Bluestone Pools in Lee’s Summit, Missouri, rose to the occasion.

“Thanks to Bluestone Pools, we are able to get a nice rotating assembly,” said Morrison.

The Morrisons don’t have a garage — only a carport better suited for summer weather. So, with parts in hand, the father-and-son duo went to work on their engine in a room in their house dedicated to a lawn mowing service.

“We spent hours honing out the cylinders, file fitting the rings,” Morrison said.

Don’t be fooled by Morrison’s meager-looking effort. His credentials include many wins and a pure stock championship at Central Missouri Speedway in Warrensburg. Morrison started racing A-modifieds in October.

At Bristol, Morrison finished 11th in the A-feature on Wednesday and 11th in the B-feature on Saturday. Battling a distributor issue, they left Bristol on Saturday at 9 p.m. and arrived at Valley Speedway in Grain Valley, Missouri, on Sunday at noon to take in practice. At Valley Speedway, they confirmed the distributor problem. However, when they came back home, Leroy Morrison and his father, Curtis Morrison, brought back memories from their trip to Tennessee that will last a lifetime.