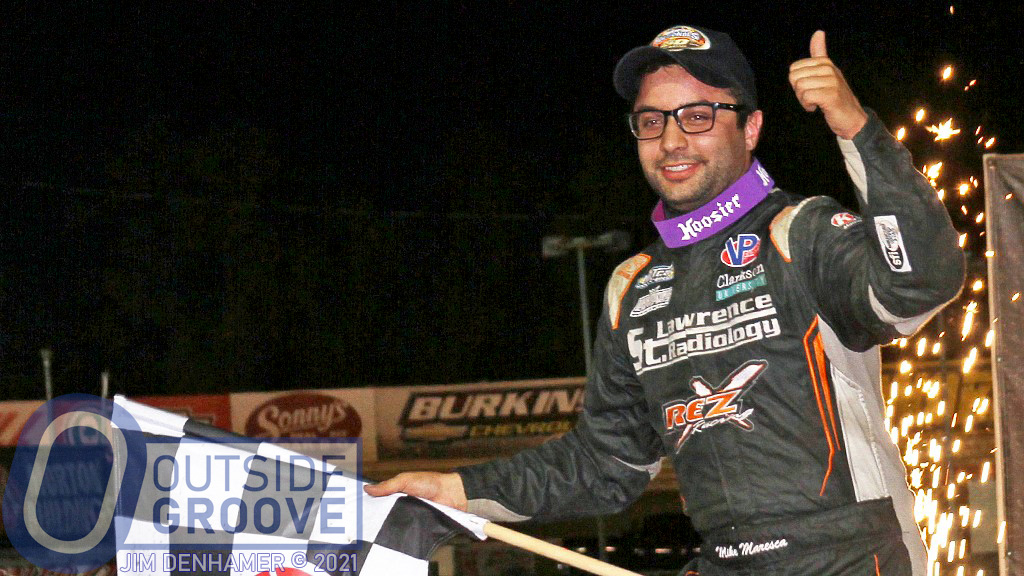 Maresca first stepped into a big-block modified in 2016. His biggest wins in the class include the 2018 Lou Blaney Memorial at Sharon Speedway in Hartford, Ohio, the 2019 Outlaw 200 at Fulton Speedway in New York, and the 2020 season finale at BAPS Motor Speedway in York Haven, Pennsylvania. However, Maresca still looked to win his first Super DIRTcar Series feature.

“I began as a guy running at dirt tracks in northern New York, Quebec, and Ontario,” Maresca, of Potsdam, New York, said. “When I first sat in a big block, my goal was to win a Super DIRTcar Series event. To have actually have done it is pretty cool.”

The victory didn’t come easy. He had to hold off seven-time series champion Matt Sheppard. He approached the challenge like a game of chess.

“I put lapped cars between me and the car chasing me,” Maresca said. “I’m aggressive — I make and create blocks on the racetrack.”

At the end of the race, Mike Maresca declared checkmate on Sheppard, winning his first Super DIRTcar Series feature.

“Once I got some distance between him and I, I hit my marks and took to the bottom of the track to win,” Maresca said. “It is great to race with Matt. He is a good friend, and I date his crew chief’s daughter.”

The DIRTcar Nationals victory will remain special for many reasons.

“The best drivers in the division are there [in the Super DIRTcar Series],” said Maresca. “I’d rank the win right up there with my biggest, most prestigious wins.”