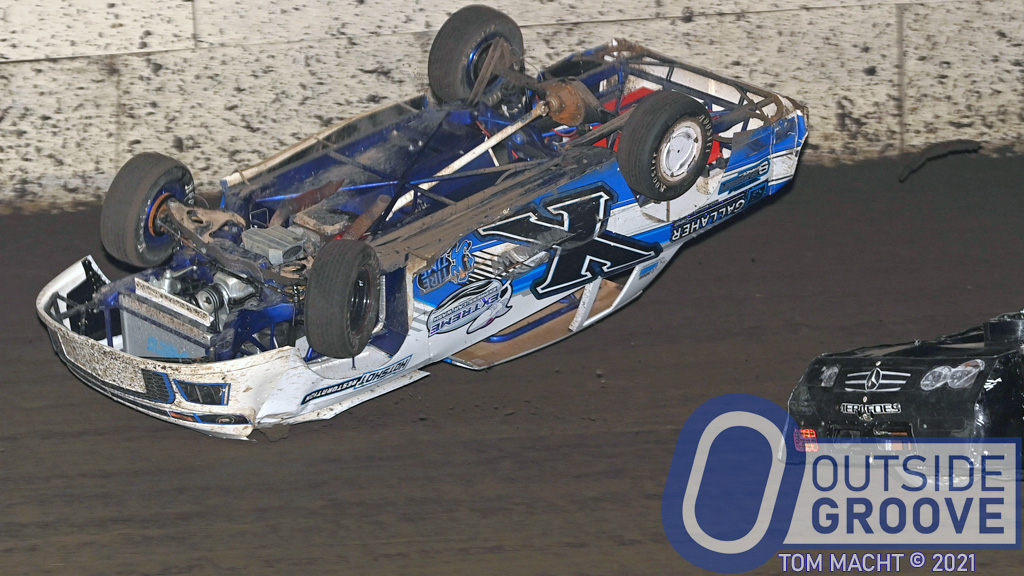 Robert Gallaher did not want to start off the year this way. He destroyed his stock car last Saturday at Antioch Speedway in California.

“I had the car set up for dry, slick racing, [with] a lot of right-side weight so the chassis could roll and transfer weight through the turns,” Gallaher, of San Jose, California, said. “It was a misty day, and Antioch Speedway’s heavy black clay had a lot of bite. I went into turn one too hard, and my car just dug in and rolled in a way I didn’t anticipate.”

Gallaher emerged from the wreck without serious injury. He did say, however, he had a sore neck two days after the accident. Gallaher sat in a Kirkey full-containment seat, with a five-point Hooker Harness belt system. He wore a HANS device with a Zamp Racing helmet.

After the ninth race on his car from Medieval Chassis, Gallaher decided to retire the car.

“It was not a typical crash — the car landed directly on the driver’s side A-pillar,” said Gallaher. “The cage bent about an inch, and the bars connected to the A-pillar were tweaked. Powder coating on several bars throughout the car was cracked at the welds and the left-frame horn was bent 1-1/2 inches. Some may have fixed it, but I felt it was compromised enough where I had to replace it.”

Robert Gallaher ordered a new chassis from Medieval Chassis on Monday. While Gallaher waits for that, he’ll accompany his father, Joe Gallaher, who also drives stock cars, at the races this weekend. The team heads to the IMCA.TV Winter Nationals at Cocopah Speedway in Somerton, Arizona. Gallaher’s son, Bobby Gallahar, will race hobby stocks later this year as well.

“Hopefully my dad will let me drive his stock car,” Gallaher said of the upcoming trip to Arizona. “We’re looking forward to this season. We will have three generations of Gallahers racing.”