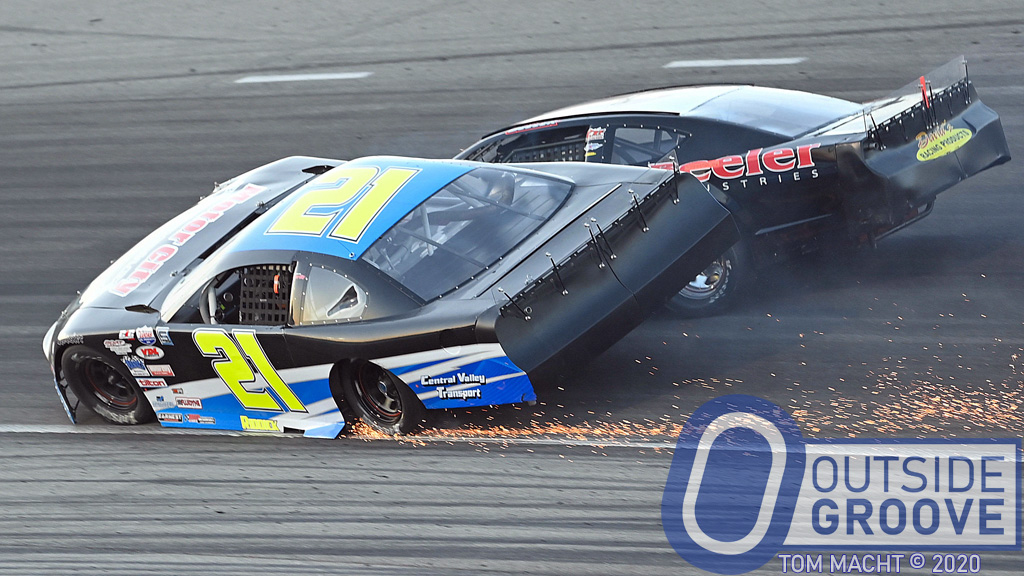 “Jordon was behind me for a lap and a half,” said Beeler, 23, of Modesto, California. “My car was tight so I took a wide entry. He came in hot and our cars touched.”

The race marked Riddick’s first in a pro late model. Riddick drove a full season in the CRA Junior Late Model Series, where he won two features and finished sixth in points.

“The pro late model had different shocks and tires,” Riddick, 15, of Sellersburg, Indiana, said. “There was no ride height rule [which CRA has] and the rev limiter offered 400 more rpm [than what the CRA Junior Late Model Series offers].”

Riddick’s first race in the West was also on the largest track he’s raced on — a 1/2-mile oval. The CRA Junior Late Model Series competes on tracks 3/8-mile and smaller.

“Aero plays a big role,” said Riddick of racing on a 1/2-mile. “You can feel the air and what it does for the car, and that is huge. I also experienced drafting. It was definitely a learning experience driving at Kern County.”

Beeler raced go-karts before joining his father, Mike Beeler, in the pro late models this year.

“I went from a shifter kart, where you could see where you’re putting your front tire, to a stock car, where you have to drive by feel,” Beeler said. “There’s a big difference. Nothing prepares you for how to feel your car, except experience.”

A driver gains experience only one way — by making laps. Luckily, the incident between Jordon Riddick and Hans Beeler resulted in minimal damage. Both continued racing after restarting in the rear. Riddick finished third, Beeler fifth.

“It pays to stay out there,” said Beeler. “Like my dad always told me, ‘To finish first, you first must finish.’”