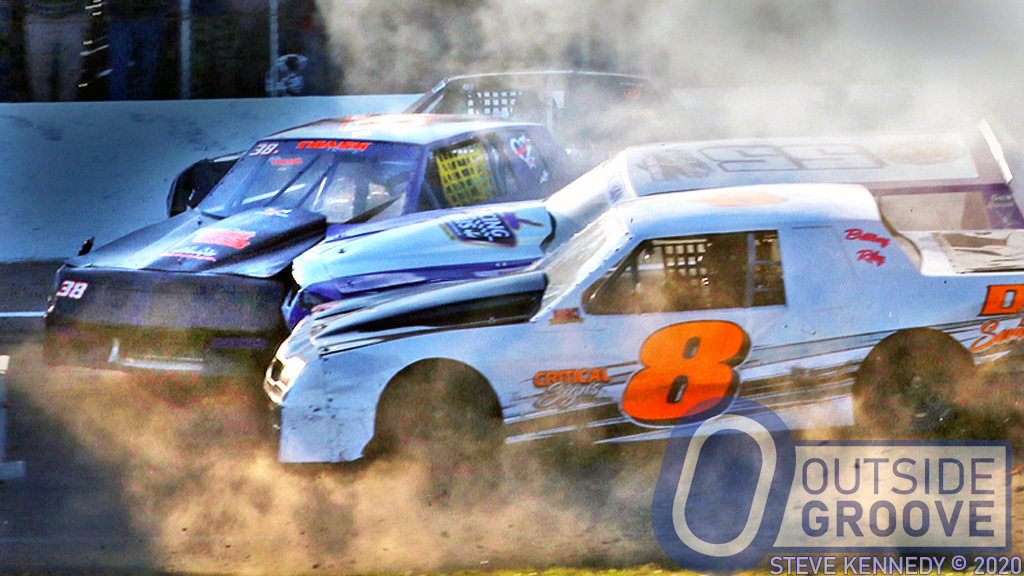 Diego Monahan (55) found himself in the middle of this melee during the sportsman feature at Connecticut’s New London-Waterford Speedbowl in September. Among the involved included Ryan Morgan (8) and Jon Porter (38). The race was his first in the car dubbed the “Swaggin’ Wagon.” Typically, his brother Shawn steers the distinctive race car.

“Unbelievable!” said Monahan, of Waterford, Connecticut. “It was my only race in the Swaggin’ Wagon, and this happened. The division’s racers are full-throttle and three-wide more often than they should be.”

A pack of cars raced three-wide for sixth and Monahan chose the center lane.

“It was a little too hairy for me,” said Monahan, who typically races SK modifieds. “Three-wides are nerve-wracking. I don’t race like that anymore. The cars were getting knocked around, and the 38 car came across us full throttle, trying to correct. He became a fish out of water. This type of racing makes me drive harder — you can’t take the racer out of a driver. I was trying to put myself in the spot ahead of him.”

The ensuing crash did a number on the Swaggin’ Wagon. It ripped the motor mounts off the engine block. The transmission came forward and the driveshaft fell out. They had to replace sheet metal both in the front and in the rear.

However, Monahan emerged from the wreck without injury. He sat in a full-containment seat from The Joie of Seating, with a Simpson five-point harness. He wore a Simpson helmet paired with a HANS device.

This Saturday, the Swaggin’ Wagon may get a new owner. In a raffle put on by Shawn Monahan, participants purchased 150 tickets for $100 apiece. The winner can choose from one of six prizes: The Swaggin’ Wagon, a complete Bandolero team of three cars and assorted parts, a street stock, an outlaw street stock, an SK modified roller, or a pro stock/super late model with a 1968 Oldsmobile Cutlass body. The winner also receives a gift certificate to Shawn’s company, Critical Signs & Graphics. Part of the proceeds goes toward the Cactus Jack Foundation, a southeastern Connecticut charity that offers aid to individuals, families, and other charitable organizations in need.

One of those who purchased a ticket was Diego Monahan himself.

“The wagon is one of a kind,” Monahan said. “You can’t beat it. It’s that good — and that’s why everyone wants it.”