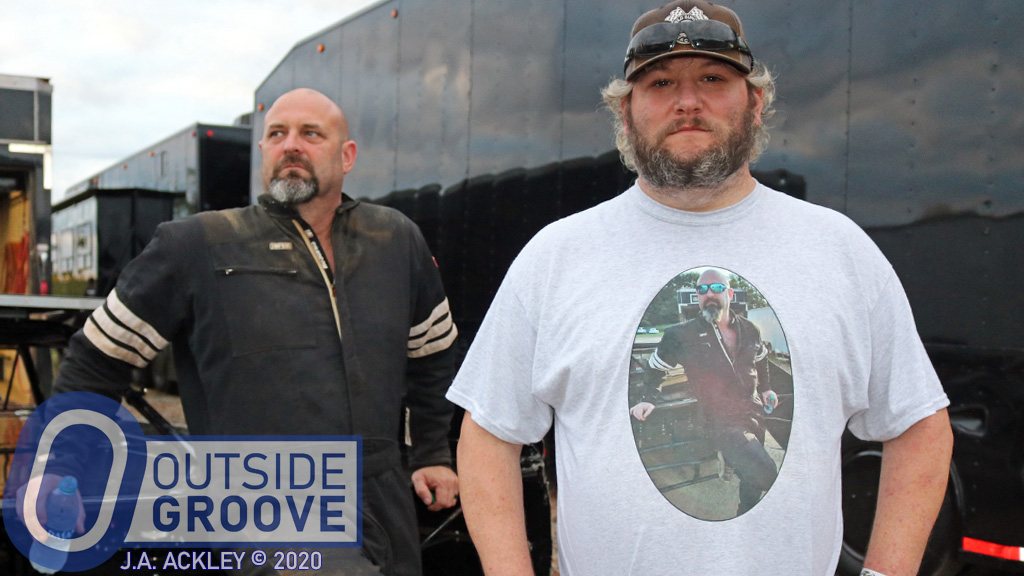 The T-shirt that Jon Cox (right) wears features the likeness of the ruggedly handsome modified driver Amos Bunch (background). What started out as a joke has now turned into one of the most-sought-after items of apparel at tracks Bunch races at near his Wartburg, Tennessee, home.

The roots of the shirt date back a few years ago, on a hot summer day at 411 Motor Speedway in Seymour, Tennessee. Cox takes photos of Bunch to keep Bunch’s wife, Tracy, in the loop when she can’t make the races. The stars aligned just right at 411 and Cox captured the candid moment.

“This is a gem — we can’t pass this up,” Cox, of Wartburg, Tennessee, said. “Originally, this was posted on Facebook, with the caption, ‘Sorry, ladies, he’s taken.’

“He got a good kick out of it, and his wife really enjoyed it.”

This summer the photo reappeared in the “Memories” section of Facebook for Cox. He shared the photo again, and it took off like wildfire once more.

“A couple of our buddies meet on Tuesdays,” said Cox. “We were joking that we were going to have to get a trailer to sell souvenirs [with the photo on it]. We’ll put this on everything — coffee cups, mouse pads. One of my other buddies made the comment, ‘Yeah, we’ll put it on a shirt.’”

Cox got a T-shirt made and debuted it at their hometown’s Wartburg Speedway.

“When they called for the drivers’ meeting, I changed [into the shirt],” Cox said. “When he came back … he got a good laugh out of it.”

Until that point in the season, Bunch struggled to finish races. That night, their streak of bad luck ended.

“I’m not mechanically inclined,” Cox said. “I keep up with the schedule of events for the night and where Amos is going to be starting. The other guys [on the crew] are the heroes. I’m just the guy who makes people laugh.”

Sure, turning wrenches carries a lot of weight. However, turning morale around during a tough stretch of the season carries just as much importance, as evident by this T-shirt.