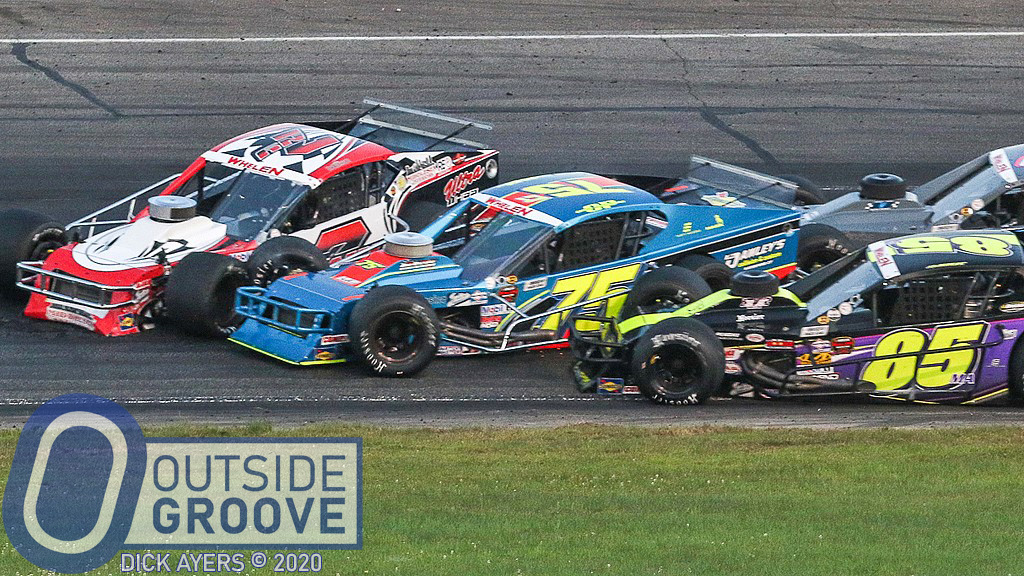 The NASCAR Whelen Modified Tour paid their second visit in less than a month to North Woodstock, New Hampshire’s White Mountain Motorsports Park. The caution flag waved seven times this edition, including on lap 185 for this melee. Jon McKennedy (7NY) had held the lead on lap 183, before Doug Coby took the top spot the next lap. Then McKennedy, Pasteryak (75), Ron Silk (85), and Dave Sapienza piled up in turn two.

“It was a pavement modified race,” Pasteryak, of Lisbon, Connecticut, jokingly said. “That’s the way they are.”

“What happened at White Mountain wasn’t as bad as it looked,” said Pasteryak. “Sure, it cost me second place.”

A second would have been Pasteryak’s best finish on the tour. He had finished third before, once in 2006 and another time in 2009. All the cars involved in the incident continued racing — except Pasteryak’s.

“My wheels got knocked around,” Pasteryak said. “When [the wheels] turned to the right [in the crash], it knocked the bleeder screw out of the right-front [brake] caliper.”

Nevertheless, Chris Pasteryak remains upbeat for the remainder of the season.

“Dad [Charlie Pasteryak] did well in Stafford Motor Speedway’s first 100-lap open modified show this year, and we’re excited about bringing his car back there on Friday night,” said Pasteryak. “For me there’s the Tri-Track [Open Modified] Series at Monadnock [Speedway, in Winchester, New Hampshire] the following week and then the NASCAR Whelen Modified Tour at Jennerstown [Speedway in Pennsylvania]. It’s all modified racing — why we love it.”