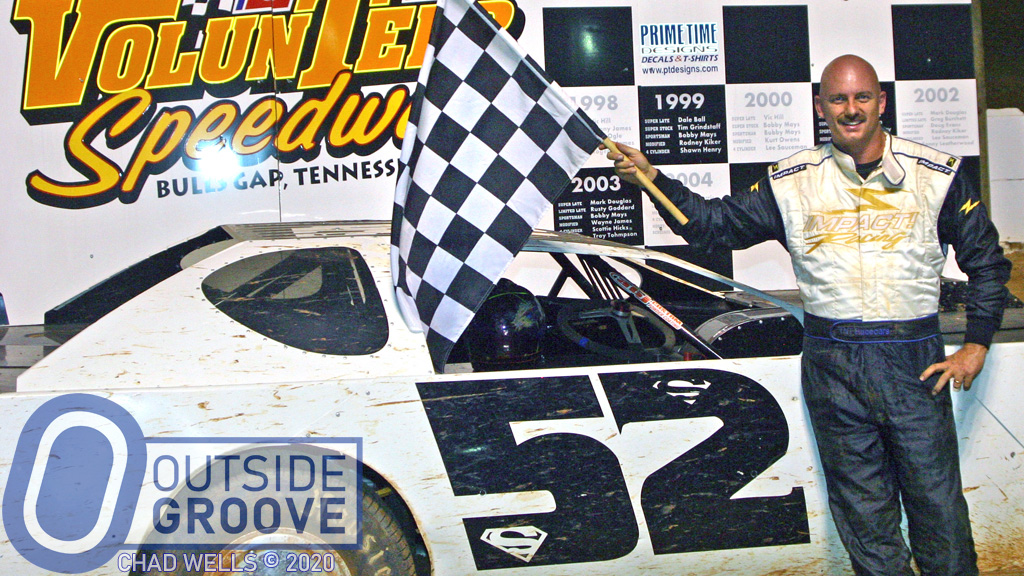 The symbol of Superman permeates the pits of Eastern Tennessee dirt tracks. Don’t take this as a sign of the racing community’s love for a comic book character. No, their “Superman” was far more real. He performed extraordinary feats inside a race car that not many other common drivers could do. This Superman impressed his competitors as much as he thrilled his fans. Most knew this real-life superhero as Scott Sexton — and he serves as an inspiration for racers across the world and the rest of the universe.

Faster than a Speeding Bullet

“If [Scott] was running 13th in the feature, I’d promise you would watch him,” said Bryant, 55, of Rockford, Tennessee. “He loved to drive hard — and, wherever he was at, he was a show, giving all he had. We probably could have won several [more races] if he had slowed down, but he raced hard, he raced to win.”

Late model driver and engine builder Vic Hill grew up with Sexton, with both cruising Eastern Tennessee in their fast cars. Their friendly competition carried over from the streets to the races.

“One year they had a bounty [on me] — I won so much at Bulls Gap [Tennessee, at Volunteer Speedway],” Hill, of Mosheim, Tennessee, said. “He and Tony Ford [of TNT Race Cars in Piney Flats, Tennessee] put a car together. We raced like hell. I led a lot of the race and Scott ended up winning — in something he hadn’t raced all year. He adapted really quick.”

Late model driver Ryan King considered Sexton one of his mentors and his team fielded cars for Sexton. Like Hill, King was amazed at Sexton’s ability to adapt.

“Most guys are like, ‘You need to do this to the car or that to the car,’” said King, 29, of Seymour, Tennessee. “Scott’s like, ‘I just got to drive it harder on this end or let up there.’ He would always change how he drove the race car to fit the car, instead of trying to change the car to fit him.”

“The comparable person I’ve seen is Jonathan Davenport,” Bryant said. “He drove by the seat of his pants. He moved around and found stuff to make it happen. He had that knack.”

Hill struggled to name a driver he could compare Sexton to.

“I don’t know of any modern-day drivers to compare how aggressive he was, but he didn’t tear up a lot,” said Hill. “He’d get a flat [tire] and you’d count him out. The next thing you know, he’s back battling for the lead.”

Scott Sexton, who won big races against touring drivers, stayed, for the most part, near his Eastern Tennessee home when racing.

“He never sold out,” Bryant said. “The last year he and I raced together, we won 28 races. We raced to race. Not to survive. Not to pay for the team. We just raced to race.”

Superman was as mild-mannered as Clark Kent.

“He was a pretty laid-back guy,” said Hill. “He didn’t get real excited. I think he liked fishing as much as he liked racing. I once said, ‘Why didn’t you come this week [to the races]?’ He said, ‘I wanted to go fishing.’”

However, unlike Kent, Sexton let loose.

“He was fun,” Hill said. “He was a good time. If the keys weren’t locked up all the time with the packer cars, there might be race after the race.”

Chad Wells, a photographer whose work appears on Outside Groove (and in this article), crewed for Sexton in his younger years. He confirmed some good-natured high jinks after the feature.

“We’d go to Tazewell [Speedway in Tennessee] — it was his favorite track,” said Wells, 39, of Sevierville, Tennessee. “People are scared to death of that place. Scott was not scared of Tazewell whatsoever. I’ve seen him run wide-open there at two o’clock in the morning on a four-wheeler.”

While Sexton knew how to have fun, he also knew when it was time to do business on the track.

And, he also always remembered his two sons, Derek and Zack.

“His boys were the light of his world,” said Wells. “He would have done anything for them.”

A Hero of the People

“You hear from fans that you cannot approach [drivers] anymore,” said Wells. “It didn’t matter what he was doing, Scott would stop, he would always take the time for his fans.”

Wells was once among those fans of Scott Sexton.

“[Scott] let me clean his race car, clean his tires, nut-and-bolt check — do the simple stuff,” said Wells. “It wasn’t anything major, but it made me feel important to be with him.”

King never stepped into a race car prior to first racing a crate late model at age 17. Instead of letting the rookie struggle, Sexton came over to King’s pit to help.

“I didn’t know anything about dirt-track racing,” King said. “He helped me a lot about how the track changed and where I needed to be on the racetrack. He taught me how to drive to where I made the car better.”

Blood clots started forcing Sexton out of the race car, starting in the mid-2000s. He raced sporadically from there on out, but when he was behind the wheel, he consistently impressed.

“He never looked like he missed a beat when he came back,” Wells said. “It was the craziest thing ever. A lot of other guys have rust they got to knock off.”

King placed his mentor in a team car when Sexton felt up to it.

“The first big race he ran for us was the Steelhead Nationals at 411 [Motor Speedway in Seymour, Tennessee],” said King, “and he won it.”

Bryant, who once worked at Smoky Mountain Speedway in Maryville, Tennessee, preparing their surface, received a call from his longtime buddy.

“He said, ‘I want to drive,’” said Bryant. “So, I brought the two-seater [to Smoky Mountain Speedway]. He drove all day — had a ball. The next day we went to Talladega [for the Ice Bowl], and he called and said, ‘I just want to tell you that I love you.’”

The following week, on January 10, 2013, Scott Sexton passed away after a seven-year battle with his disease. He was 46.

Today, July 15, would have been his 54th birthday.

While Scott Sexton no longer remains among us mortals, his memory lives on. For the many people his life touched, they’ll continue to tell his story for years to come, reminding future generations about Scott Sexton, who proved a lot of heart goes a long way in this sport.