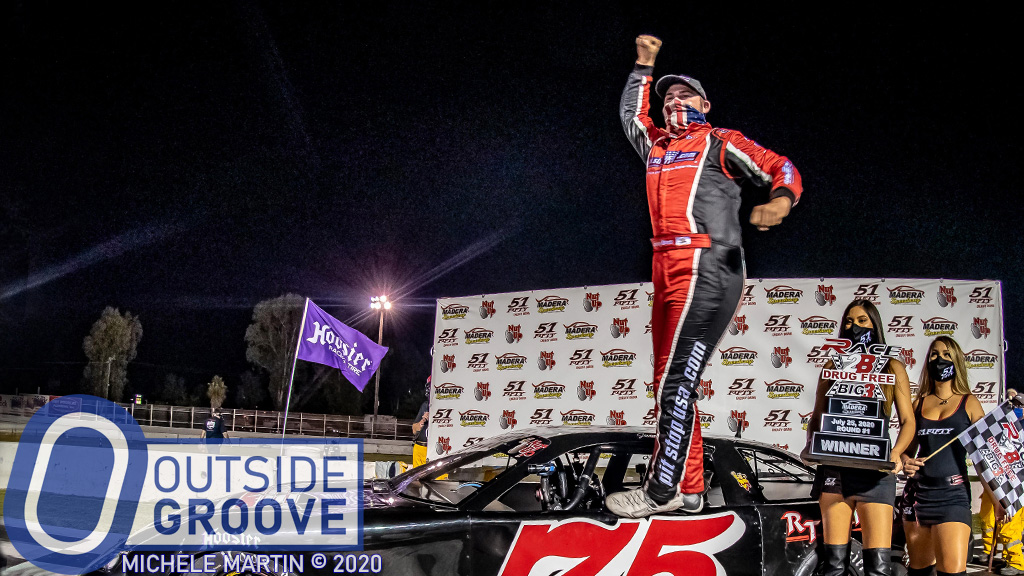 Jeremy Doss has searched high and low for opportunities to race — and win. Doss, the reigning Kulwicki Cup champion, presented by the Kulwicki Driver Development Program (KDDP), has won in a variety of classes and at several different places.

His wins include two in the Spears Modified Series at a pair of California ovals — Kern County Raceway Park in Bakersfield and Irwindale Speedway. Doss ventured to Idaho’s Meridian Speedway, where he won the late model feature on Memorial Day weekend. He even has a victory in a bomber at his local track, Ukiah Speedway in California.

This past weekend Doss scored his second win of the season at Madera Speedway in California (pictured).

“Madera Speedway is a tough track to win on,” Doss, 23, of Upper Lake, California, said. “It is one of those racetracks where when you win, you can leave your setup alone, come back for the next race, and have to change everything to be competitive. That track keeps us on our toes.”

Doss gives much of the credit to his father, Mike, for his winning ways.

“My dad has been hard on me since the beginning of my career — but that is good,” said Doss. “I was aggressive when I was younger, putting cars in places they shouldn’t be. He taught me to think about making that move, and to be more patient. It’s usually a choice between taking the lead and setting the pace, or saving the tires and going for it at the end of the race.”

Jeremy Doss will drive any type of race car —from late models to bombers.

“I have to get behind the wheel of a race car whenever I have a chance,” Doss said. “My advice for younger drivers: Put yourself out there. Take every opportunity that comes your way.”