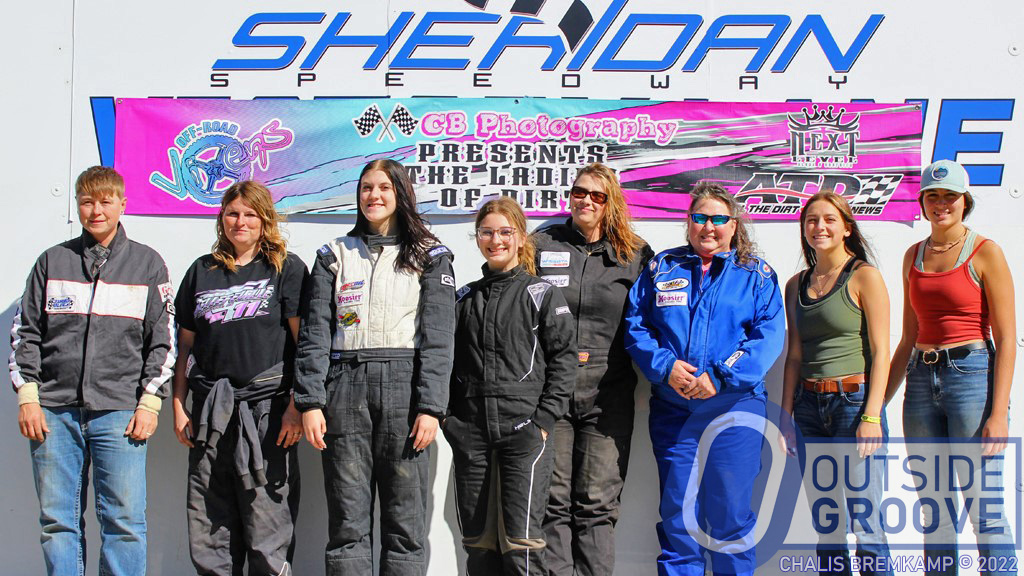 The Ladies of Dirt Team is a Facebook Messenger chat started by Outside Groove contributor Chalis Bremkamp that helps fellow women in racing. This past September, Bremkamp organized the annual celebration of women at Sheridan Speedway in Wyoming.

Bremkamp understands their issues. She is not only as an active member of the oval-track racing community, but also races, albeit in snowmobiles.

“Camaraderie helps you to grow,” Bremkamp, of Sheridan, Wyoming, said. “Through my personal racing experience, I know creating a family, such as this Messenger group, boosts the self-confidence of each family member. The Messenger group is a place for women to get together to share successes, failures, and concerns. Since we are the minority in the sport, I wanted to give women from all tracks the tools to succeed. This group is not connected to any one track.”

Neary, a rookie driver, said the Messenger chat helps the women connect across the vast expanse of the West.

“It is really important that this Messenger group exists,” said Neary, of Billings, Montana. “We can talk to each other when we are getting ready to race, supporting each other, even though we are hundreds of miles apart, at separate speedways on the same night.”

Those relationships grow stronger through continual use of The Ladies of Dirt Team chat.

“It is important for us to keep these bonds going,” Neary said. “There is a sense of togetherness. We have helpful discussions. The topics could be about a car problem or how to handle a racing situation. [Before I had raced] at Sheridan Speedway, I got a hold of Annastasia [Wilson] for pointers. She got in touch with me when she wanted the same info about Big Sky Speedway [in Billings, Montana].”

“The group is a great forum for asking questions or offering congratulations to other female racers,” said Wilson, of Sheridan, Wyoming. “Before I drove at Casper Speedway [in Wyoming], I communicated with other drivers in the group who had raced there. The group was very helpful.”