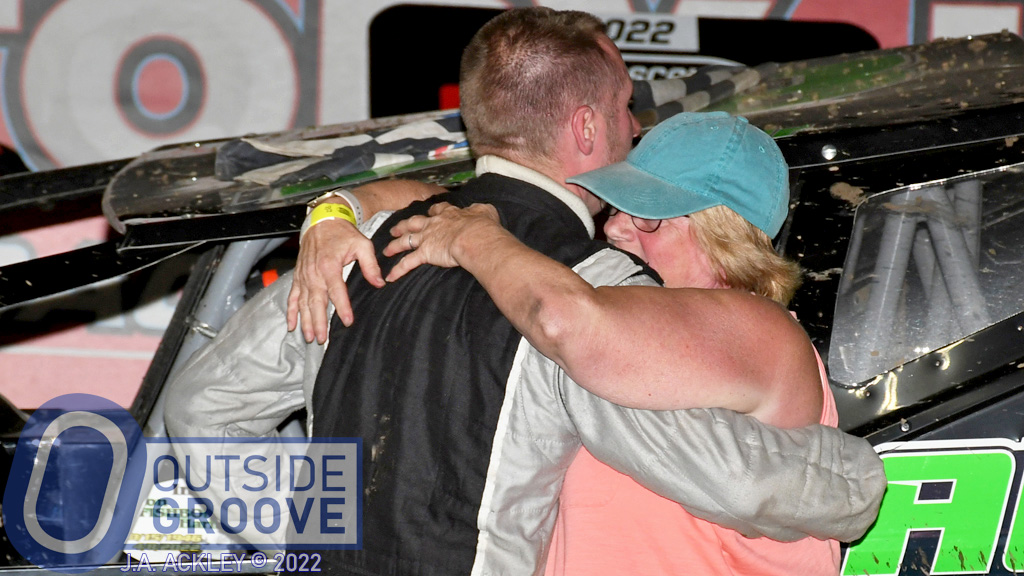 It took him 10 years, but Ron Haring Jr. finally paid a visit to victory lane in a modified at Grandview Speedway in Bechtelsville, Pennsylvania. His mother, Cheryl, rushed to congratulate him with a hug. The win came in a season that began with the passing of his father on April 8.

“I knew he was watching,” Haring said as he pointed skyward after taking the checkered flag. “My dad drove a modified at Grandview Speedway ever since I was born. He’s the reason I’m here every week, doing the same thing as he did.”

The elder Ron Haring died after a battle with cancer.

“Every week he was here, even when he wasn’t in the best of health — he never liked to miss a race,” Haring, of Alburtis, Pennsylvania, said. “We were supposed to race on Saturday, April 9. He passed on that Friday night [before], and then the show was rained out.”

Haring was a man on a mission last Saturday.

“I was zoned in to not screw up,” said Haring, whose only other feature win came in a pavement modified at Mahoning Valley Speedway in Lehighton, Pennsylvania. “The odds of a little guy like me winning a modified feature at Grandview Speedway is one in a million. The stars aligned and things went our way.”

Haring and his brother, Keith, who races sportsman modifieds, make up the family-owned effort.

“Everything for our two cars is paid for by us,” Haring, who hauls tires for a living, said. “We have no big sponsors.”

The Haring brothers learned how to budget for racing from his father.

“He told us to pay our own bills,” said Haring. “We don’t owe anyone a dime — it’s all ours. We worked for Dad, but racing came out of our own paychecks. He did not spend his hard-earned money on us going racing. We had to do it on our own, and we did.”

And, on his own, Ron Haring Jr. won his first modified feature at Grandview Speedway.