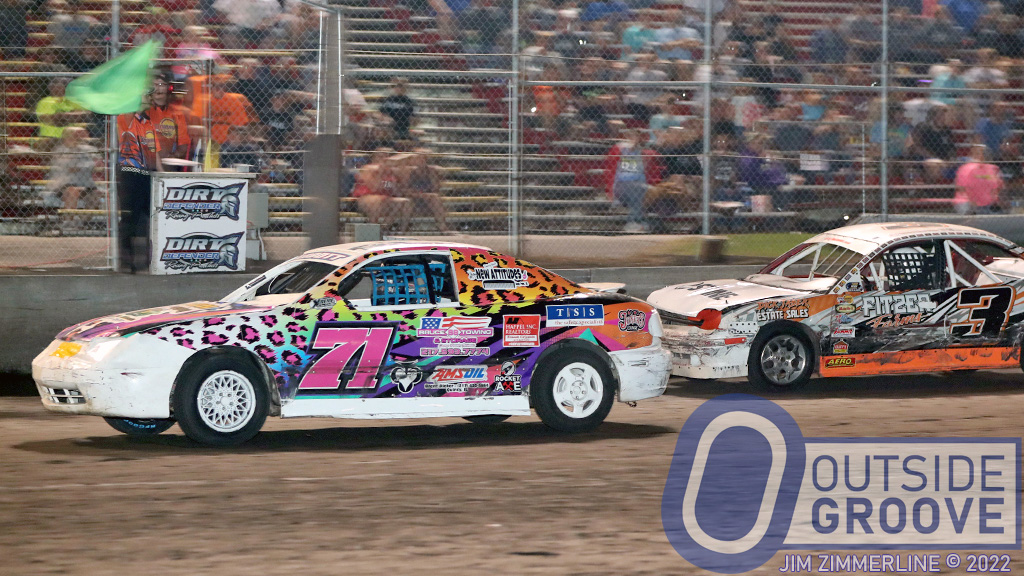 This week Kimberly Abbott (71) became the highest-finishing woman in the history of the IMCA Speedway Motors Super Nationals. She finished second to Jake Benischek in the sport compact class at Iowa’s Boone Speedway. While Abbott started ninth, she eventually assumed the lead. Benischek, though, passed her on the final lap.

“Jake had me by a bumper at the white flag,” Abbott, a 28-year-old hair and nail artist from Camp Point, Illinois, said. “The Benischek boys are fast. I’ve beaten Jake before, but never in a big show.”

Abbott in her own right has an impressive list of accomplishments, which includes three track championships.

“It’s our ninth time at the Super Nationals,” said Abbott. “Previously, I had one third-place finish and last year I received the hard charger award.”

Her second-place finish came in a car she has raced since 2013.

“It’s me and my dad, Bobby, when we go racing,” Abbott said. “We have no other pit members, though a group of family members follow us around.”

Abbott started racing as a 14-year-old. She didn’t fare as well in her early days as she does now.

“When they told the sport compacts to run in the opposite direction around the track at Lee County Speedway [in Donnellson, Iowa], I wasn’t used to it,” said Abbott. “I got up into the wall. The wheel turned and I broke my wrist. That happened in June. When the cast came off in September, I was back behind the wheel.”

While Kimberly Abbott has made her mark on the IMCA Super Nationals, she’s hoping another woman finishes one spot better — Taylor Kuehl in the sport mods. (For more on Kuehl, read “Taylor Kuehl: Winning Fans & Races”.)

“It is a huge accomplishment to be the highest finishing female driver,” Abbott said. “I wanted to be the first female IMCA Super Nationals winner, but now I am cheering for Taylor to win.”