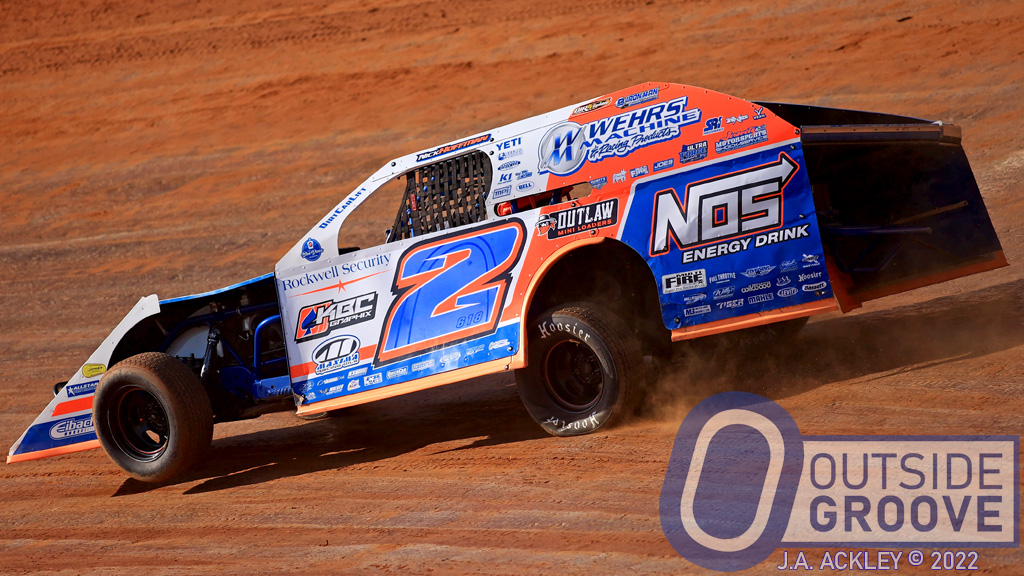 Once again, Nick Hoffman put on a show during the DIRTcar Summit Racing Equipment Modified Nationals. This year, he won a whopping 12 out of the 15 features he entered. Rumors have circulated that Hoffman runs a “NASCAR engine.” Well, they’re true. Sort of.

“The students that take the NASCAR elective, and keep up a 3.8 GPA, with 98% professionalism and 98% attendance [marks], they get into my program and put engines together,” Darrell said. “One of [the engines we built] ran in Nick’s car for the whole [Modified] Nationals. We also have Burt and Jason Myers, who run [pavement modifieds] at Bowman Gray Stadium [in Winston-Salem, North Carolina]. And, we have four ARCA teams — Rev Racing and the Andy Hillenburg team.”

What’s Under the Hood for Nick Hoffman

Darrell went over the details of the engine.

“It’s basically a 420-cubic-inch, 18-degree small-block Chevrolet,” said Darrell. “It’s not a 450 cubic-inch, like everyone wants to believe. All we are trying to achieve is something that’s smooth and reliable. If we build something reliable, Nick will figure out how to get it to the front.”

Indeed, Nick Hoffman rarely experiences mechanical failures. He has run this particular engine since the beginning of the year at the DIRTcar Nationals at Volusia Speedway Park in Florida.

Hoffman DNF-ed after leading the Summit Modified Nationals event at Federated Auto Parts Raceway at I-55 in Pevely, Missouri. There, he broke a camshaft, which Darrell said resulted from a parts failure.

This past weekend, during the Brucebilt Performance Parts Iron-Man Open Wheel Modified Southern Series event at 411 Motor Speedway in Seymour, Tennessee, he experienced his second failure. The distributor went bad during his heat race. Earlier, he had set fast time in qualifying.

Besides that, reliability has certainly been the hallmark of Hoffman’s 2022 season.

When it comes to the numbers on the dyno, Darrell offered his perspective.

“A lot of engine builders think that the driver wants a big horsepower number — I don’t care about that,” Darrell said. “Everything we build is around 690 to 710 horsepower. This engine has 630 to 640 [lb-ft of torque].

However, at the end of day, Darrell Hoffman takes great pride in not only his son’s achievements, but his students’ as well. Like many of those who work in racing for living, Darrell was once a kid with a dream. He still recalls what that was like when he was cutting his teeth in the St. Louis, Missouri, area.

“Penske was looking for a student for their IndyCar team,” said Darrell. “I told them this student I got is really good. The first race he went to, they won the Indy 500. I’m sitting at home watching that student jump off the wall at Indy. That’s awesome.”