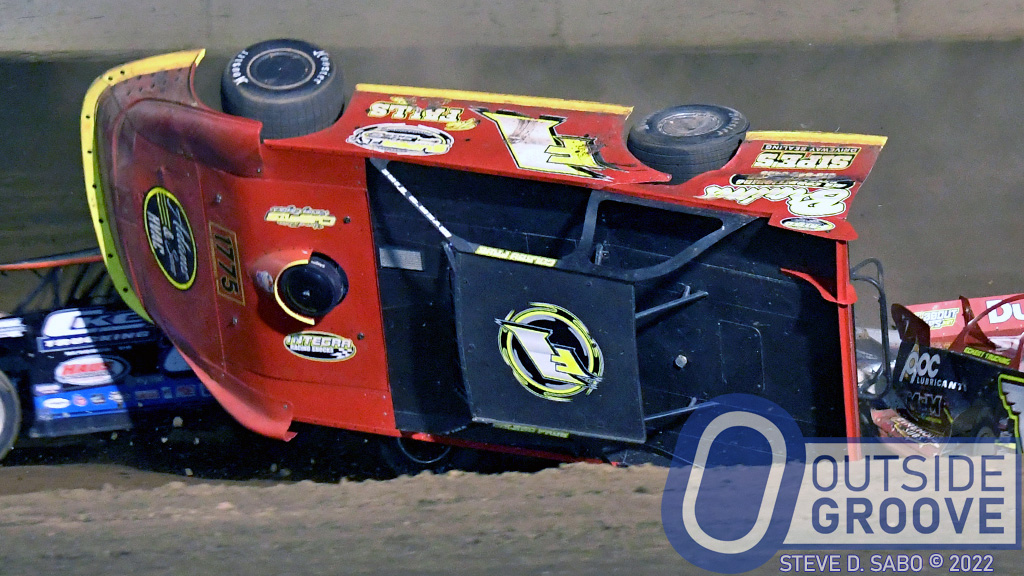 Things started off well for Coleby Frye on Sunday. In the first appearance of the super late models on the 3/8-mile at Bridgeport Motorsports Park in New Jersey, he set fast time. However, when the feature rolled, things took a turn for the worse.

Frye took the first spot on the third lap of the 40-lap feature. He widened his lead until a caution on lap 27. On the restart, Frye took the outside and National Dirt Late Model Hall of Famer Rick Eckert rode on the inside.

“We rubbed a bit, and then our noses locked together,” Frye said of the contact between his car and Eckert’s. “His right front was on top of my left front, and it pinned my wheel and spun me around.”

“The crash tore up the body a bit, but there wasn’t any frame damage,” Frye, 37, of Dover, Pennsylvania, said. “A carburetor stud got broken, so we could not continue in the race.”

Away from the track, Frye has a full plate, to say the least. At his business Fryeco Fabrication, Frye builds and repairs race cars, supplies body panels, and owns Superfly Performance Shocks.

“Things are going great at Fryeco,” said Frye. “We are busy as heck. We are doing a lot of updating of chassis, keeping cars relevant with all the changes and saving drivers money.”

Coleby Frye flipped in one of hise cars. He sat in a The Joie of Seating full-containment seat, with a Crow Safety Gear five-point harness. Frye wore a HANS device paired with a Simpson helmet.

“The safety equipment worked well,” Frye said. “The car wasn’t that bad off. Things could have been a lot worse.”