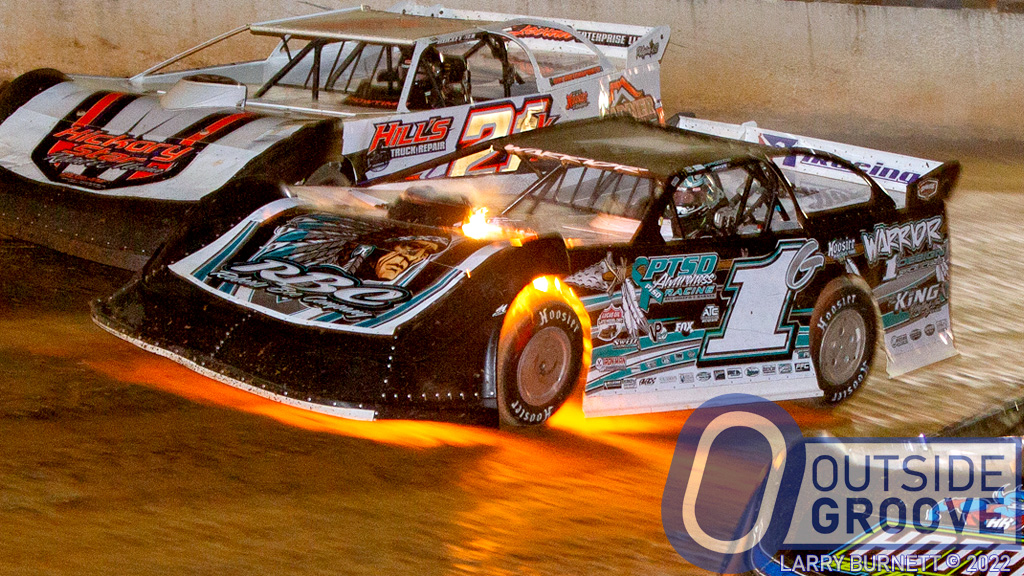 As the dirt late model driven by Ryan King entered turn one at Tazewell Speedway in Tennessee, a fire erupted under the hood. The incident occurred during the Valvoline Iron-Man Late Model Southern Series/Schaeffer’s Oil Spring Nationals co-sanctioned event.

“I was coming down the front straightaway and a big fireball came up from underneath the hood,” said King, 30, of Seymour, Tennessee. “As soon as I had seen that, it was stop and get out of the car as I fast as I could. I stopped at the opening of turn two [in the infield]. I knew that on our four-wheeler, we keep a fire extinguisher on there. If the racetrack couldn’t get there, my crew could get there.”

“I watched the video,” King said. “From the time I stopped, I was out of the car in 10 seconds. Then, in 15 seconds somebody was there with a fire extinguisher.”

King said he constantly thinks of how he’ll get out of a car in the event of a fire. An incident early in his career at Mountain View Raceway in Spring City, Tennessee, helped motivate him to develop an escape plan.

“My biggest fear is being trapped in a car during a fire,” said King. “This is something you need to be mentally prepared for. I remember the first time I flipped a car. Luckily, I wasn’t on fire. I unbuckled the belts, which you think is the first thing to do, but I couldn’t get out until I took the steering wheel off. Here I was, up against the steering wheel, and … I ended up getting stuck. It took me forever to get out of the car. After that, I [learned and memorized] the steps to take to get out of the car as fast as possible.”

In case King couldn’t escape the car, he took precautions to protect himself. He wore a Velocita fire suit, with a Simpson Vudo helmet, Simpson Hybrid head-and-neck restraint, Velocita shoes, and K1 RaceGear gloves. The Warrior Race Cars house car had a Firebottle onboard suppression system. It did not go off as its sensors were located in the cockpit and in the fuel cell area.

Ryan King said a fuel leak caused the fire. It leaked from where the fuel line meets the fuel regulator, from the hose side of the fitting.

“[Fuel] filled up the valley of the intake [manifold],” King said. “I’m assuming as the car went into the corner, the car probably backfired and ignited the fumes.”

King said the fire appeared to damage only the oil breather. He and the Warrior Race Cars crew will repair the car in time to make their next schedule event, the Castrol FloRacing Night in America race at Ohio’s Eldora Speedway on Tuesday, April 26.