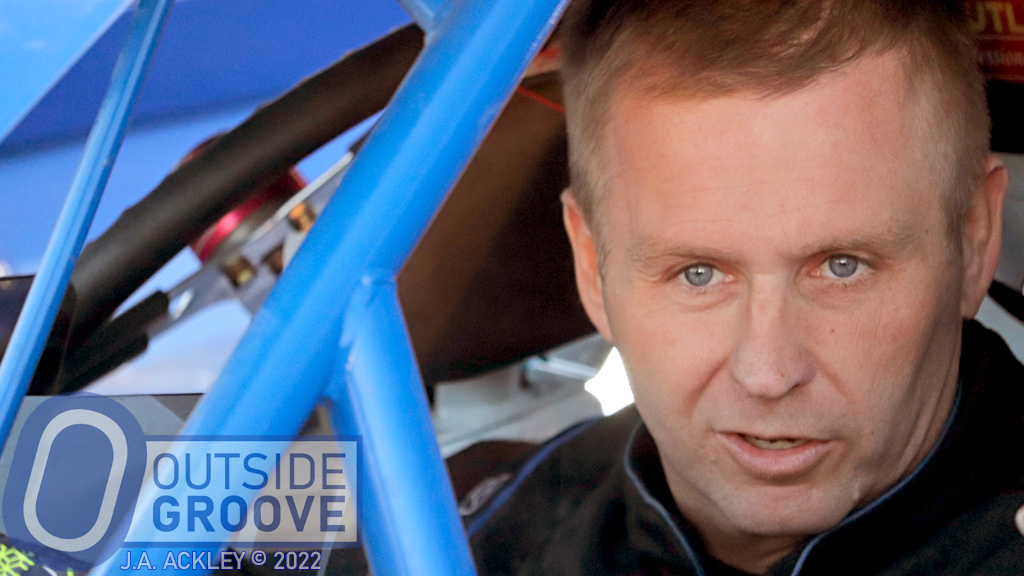 “Racing is my job and my hobby,” Marlar, 44, of Winfield, Tennessee. “I don’t fish, I don’t hunt — I just race. Me and my wife do some traveling, but I don’t have a getaway. A getaway for me is to go over to the NASCAR world.”

Yesterday, NASCAR Cup Series drivers Kyle Larson and William Byron raced at Volunteer Speedway. While Larson has a wealth of experience on dirt, and some in late models, it was Byron’s first time racing a dirt late model in competition. Byron qualified via a provisional and finished 24th of 25 cars. Marlar understands the difficulty of transitioning from one type of racing to another.

“They threw Byron to the wolves last night,” said Marlar. “It’s tough to swap disciplines back and forth. You can do it, but it takes time. Larson’s been doing [dirt late models] for a bit, testing a lot, and he can flow back and forth [between dirt late models and NASCAR] pretty easy. The more you do it, the better you get.”

Marlar said the transition from dirt late models to NASCAR is more difficult than vice versa.

“For a NASCAR driver who wants to race late models, they can rent a track and run hundreds of laps,” Marlar said. “When you race NASCAR … you [can’t test and you] don’t get much practice.”

Many NASCAR racers deemed among today’s greats, such as Jimmie Johnson and Tony Stewart, struggled early on in their stock car career. Some forget that.

“I’ve watched a lot of footage on some of the best NASCAR drivers, and there’s a lot of footage of them crashing a lot of stuff during their early years,” said Marlar. “When I had my dirt late model learning curve, nobody knew my name. When you get into NASCAR, and you’re having your learning curve on display on national TV. You can get a negative or a positive picture painted of you pretty quickly.”

The mental aspect of NASCAR also offers a challenge for Marlar.

“You got crew chiefs and spotters talking to you all while you are looking up at the [rearview] mirror that’s full of somebody’s truck,” Marlar said. “There’s definitely a lot more mentally going on when you drive the NASCAR stuff. With the late models, picture a horse with a set of blinders on and it’s going as fast as it can.”

Marlar has competed in a variety of classes on dirt tracks. He compared the truck to what he has raced before.

“Imagine if you took your hobby stock and put a late model motor in it,” said Marlar. “[The truck] is big and lethargic, yet has enough power for it to get away from you. It’s really hard to drive … and they have some of the best drivers in the world in them.”

This weekend Mike Marlar races the No. 33 truck for Josh Reaume Racing. Tom and Rocky Smith, of Smithbilt Homes in Knoxville, Tennessee, helped him obtain the ride for Bristol and other NASCAR races in the past.

In total, Marlar has made four starts among the top three NASCAR series — Cup, Xfinity, and Trucks. His best finish came in 2019, racing for Reaume, where he finished fourth at Eldora Speedway in Ohio. Yet, Marlar enters Bristol with modest expectations.

“Success for me is staying out of the wrecks, finishing the race, and not be somebody that’s just moving over for the leaders to come by,” Marlar said.

Mike Marlar hopes to enjoy the experience, and maybe parlay it toward future “getaways” in NASCAR.

“You only live once, and [running NASCAR] is bucket-list type of stuff for me,” said Marlar. “I have no other bigger plans. Maybe, one day, I’ll race a mile-and-a-half, like Atlanta or Texas, or run Daytona.”

Outside Groove Note of Transparency: Corrected the name of the event at Volunteer Speedway (2022-04-20).