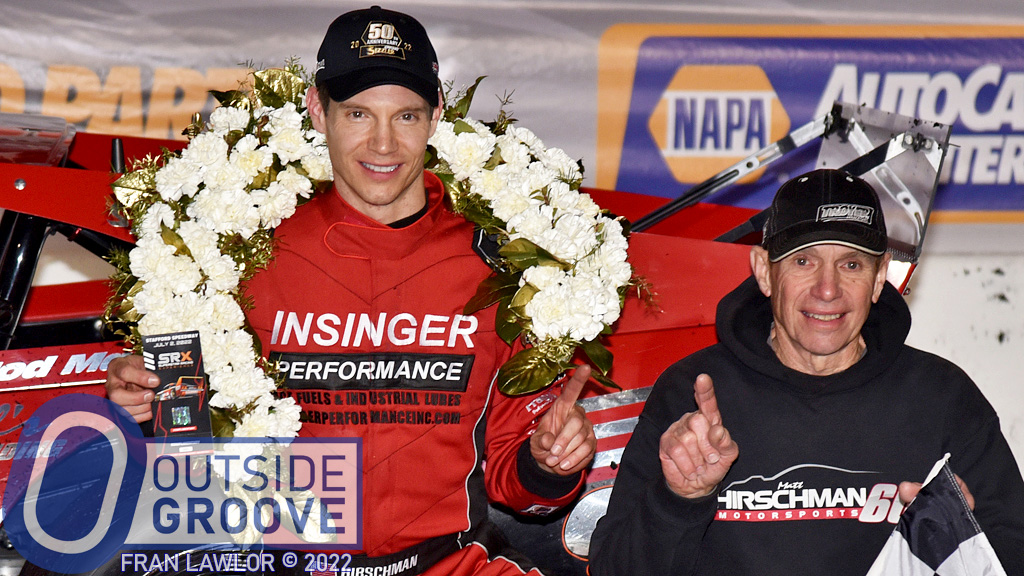 “I gave him a good car to race, with no mechanical problems and no gremlins,” said Tony, of Northampton, Pennsylvania. “He can concentrate on the chassis.”

When the 100-lap feature started, Tony and his wife, Brenda, settled into the pit grandstand.

“I made a few comments to Matt on the radio, but I was pretty quiet,” Tony said. “As the race began winding down, Brenda was shaking so badly. My knees started shaking. It’s the 50th Sizzler — and winning it is a way bigger deal than winning a past Sizzler.”

What Led to Matt Hirschman, the Racer

Matt just started racing in 2002. However, his focus was on his father’s car.

“Matt was my crew chief back then, and a three years earlier, we decided that we would try to win races we hadn’t won,” said Tony. “I wanted to check off the Thompson 300 and the Spring Sizzler before I wound down my career.”

Tony had won many big events in the modifieds. A 300-lap event at Stafford Motor Speedway in 1999. A Race of Champions at the now-defunct short track at Pocono Raceway in Pennsylvania. The Bud 200 at Oswego Speedway in New York. Tony also earned two NASCAR Whelen Modified Tour championships (2004–2005).

“In 2004, we felt we were gaining on Stafford,” Matt said. “We finished second in the 2004 Sizzler. We felt we were closing in on getting that win.”

The next year, Tony won the Spring Sizzler. Meanwhile, Matt’s experience as his father’s crew chief honed the setup skills he has a reputation for.

“We raced and learned at every type of track, from the mile at New Hampshire Motor Speedway to the Riverhead Raceway’s quarter-mile [in New York].”

Matt Hirschman had not competed in a Spring Sizzler since 2014. The event’s format has varied over the years.

“The strategy to win has changed along with the race,” Matt said. “My dad won a 200-lap race, where caution laps counted. This year we had a 100-lap race under green, with heats and dual qualifying races. It changes the pit stops — we made only one.”

Matt credited his team of 15 people for his success.

“We have dedicated crew members who gave us a great pit stop,” said Matt. “I call my own strategy. The race had potential for more pit stops, but the way it played out we only needed one.”

The elder Hirschman admired how his son raced his competition — and vice versa.

“The racing between Matt and Ryan [Preece] was the way racing used to be — hard racing, clean racing,” Tony said. “[It was] none of this TV stuff you see, when a driver says he had no choice but to take the other guy out.”

Preece and Hirschman swapped the lead without contact. (For more on Ryan Preece, read “Ryan Preece: Having Fun with his Modified”.)

“They left each other just enough room,” said Tony. “There were sparks flying from both cars, but if we knocked him out of the way or he knocked us out of the way, I wouldn’t have been happy.”

The moment in victory lane was emotional.

“We both knew what it all meant, without words being said,” Matt said of he and his father while in victory lane. “It was an enjoyable moment. It was late that night that it all sank in.”

In addition to the Spring Sizzler victory, the Hirschmans share wins in the Race of Champions, which has been held at several tracks and now takes place at Lake Erie Speedway in North East, Pennsylvania. Tony won four of those events; Matt won eight.

“Certain wins have certain meaning in a driver’s career,” said Matt. “As father and son, we each won the two most historic events [Race of Champions and the Spring Sizzler] in modified racing. The 50th Spring Sizzler win is one of the highest-ranking wins in my career.”