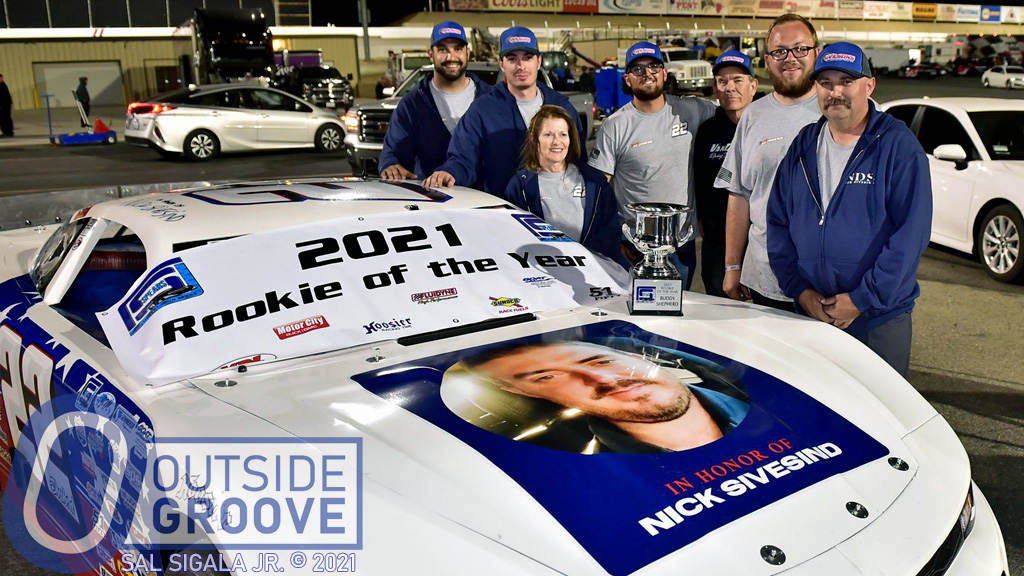 Last weekend, Buddy Shepherd officially won the 2021 Spears SRL Southwest Tour Series rookie of the year at Kern County Raceway Park in Bakersfield, California. However, the celebration for that achievement was held the same day as a celebration of life for his late car chief, Nick Sivesind.

Sivesind, 32, of Bakersfield, passed away from Covid-19 on September 20. His untimely death occurred just days after attending the races with Shepherd. A little over a week earlier, Sivesind and his wife, Traci, welcomed their first child, Nicholas Jr., on September 14.

Shepherd and his family covered the hood of their super late model with a portrait of Sivesind. Prior to the opening ceremony of the race at Kern County Race Park, they held a celebration of life for the late car chief.

“Nick has to be proud — he was so happy when he was at the track,” Shepherd, 22, of Bakersfield, said. “It was a learning year for us. He saw me grow. Nick always believed in me. He wanted the best for me. We were really close, and it was hard to lose him.”

Sivesind had previously owned super late models driven racers such as Erik Jones, Daniel Hemric, and Lance Wilson. When the Shepherds decided to a field a super late model for Buddy in 2021, Sivesind stepped up to help.

“Last January, he and his wife, Traci, drove with me to VanDoorn Racing in Muskegon, Michigan, to pick up my first car,” said Shepherd. “We really bonded after the trip. Nick came over to our house to help us with the car every chance he got.”

Buddy Shepherd will travel to Nashville Fairgrounds Speedway in Tennessee for the All American 400 on October 29–31. He’ll carry Sivesind’s name on the roof of his race car.

“It was Nick’s idea that we should race at Nashville,” Shepherd said. “So, we are going to roll with it. As far as next year goes, everything is up in the air.”