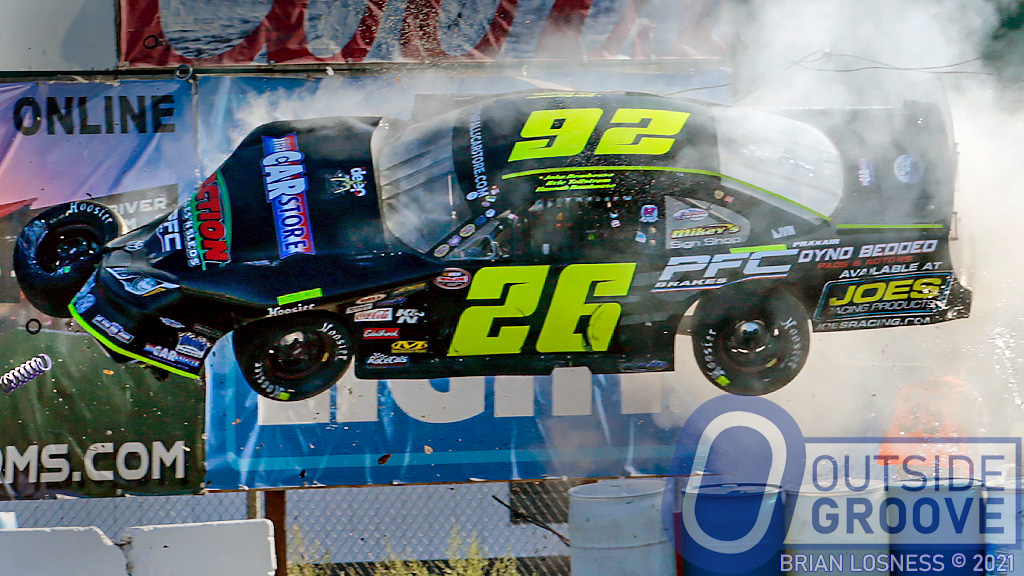 When his throttle stuck wide-open, John Newhouse could only hold on for the ride. The incident occurred during qualifying for the Idaho 208 at Meridian Speedway in Idaho.

“I was wide-open when I pulled back on the throttle and nothing happened,” Newhouse, of Twin Falls, Idaho, said. “My arm swung when I reached for the kill switch and I missed it. I went 40 more feet into the turn at full throttle. The car slid along the K-rail and I got airborne.”

“I was first concerned about fire, and the track safety crew told me there was no fire,” Newhouse said.

Newhouse’s fear for fire was warranted, as he later found out. Luckily, he prepared for a situation like this.

“The fuel pump broke off during the wreck,” said Newhouse. “There was no fire because we had an Oberg [Filters fuel line safety check valve] to stop the fuel flow.”

The track crew rushed to his car soon after.

“[I had to] take a few seconds to see if I felt I had any injuries,” Newhouse said. “My ribs were sore. I later went for a CT scan as an extra measure because I had previously injured my liver in a motorcycle crash.”

Other than sore ribs, Newhouse came out of the harrowing crash with no other injuries. He sat in a ButlerBuilt full-containment seat, with a Crow Safety Gear five-point harness. Newhouse wore a Bell carbon fiber helmet paired with a HANS device.

“I use knee knockers and leg supports, which are game changers when you have a hard wreck — I had no bruises,” said Newhouse. “What really saved me was the integrity of the Pathfinder chassis. The roll cage was 100% intact.”

While the roll cage did its job, John Newhouse said the crash destroyed the car. He said the wreck started when the Holley 650-cfm carburetor’s secondary bracket — which holds the plastic cam that actuates the accelerator pump — rolled over the cam and hung up on the accelerator pump arm, causing the throttle to stick wide-open.

“I religiously check my throttle to make sure there is no debris or anything else that can cause it to stick,” Newhouse, who has raced cars since 1995, and motorcycles before that, said. “I insist on checking the throttle myself. Manually, there was no problem. Under racing conditions, foot pressure is a lot greater than what is exerted with hand checking the linkage. Having a stuck throttle is the last thing you want to have happen.”

Bob Oliver, of Competition Carburetion, recommended a simple test routine during warm-ups to ensure that a throttle doesn’t stick.

“Coming off of turn four, press your foot to the floor,” said Oliver. “Count ‘one thousand one, one thousand two,’ and release. If the throttle sticks, there is time to hit the kill switch and coast to the infield. Then, do it one more time coming off of the second turn just to be sure.”

Thankfully, without any serious injuries, John Newhouse will return to the driver’s seat. However, with no late model, the 2020 Meridian Speedway late model champion plans to finish the year racing one of his trucks at various tracks around the Northwest.