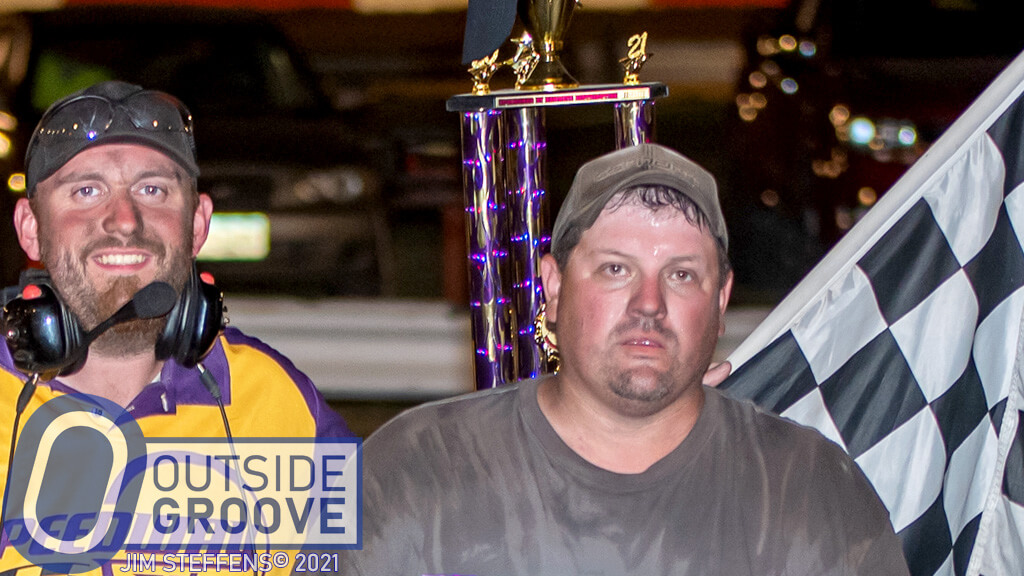 Earlier in the night, track officials disqualified Harris after his heat race win. They said Harris violated the rules by having a 3″ hole on each front fender. The disqualification irked the 2019 and 2020 IMCA stock car champion at Park Jefferson International Speedway in Jefferson, South Dakota.

“I was a little upset,” said Harris, a natural gas field technician for Berkshire Hathaway. “I’ve been racing 25 years, and never got DQed for anything, anywhere. This DQ was disheartening. I didn’t argue with the IMCA officials. I know to bite my tongue and do what they say if I want to keep racing.”

Harris said he put the holes in his fenders because of the Schoenfeld headers he uses. They rest on the frame and dump exhaust out on the side instead of the bottom of the car like other rides do.

“I put the holes in the fenders two years ago,” Harris, of Homer, Nebraska, said. “The car made it through the IMCA Lone Star Stock Car Tour and the IMCA Speedway Motors Super Nationals, and I wasn’t disqualified,” Harris said. “The headers dump toward the fenders, but are 14″ from the fenders. I thought it was a good idea. The holes keep the temperature down and get the exhaust fumes out.”

Going forward, Ryan Harris said he will keep the holes in the fenders covered.

“I wasn’t smiling in victory lane — I was a little upset,” said Harris. “I proved that the holes had nothing to do with performance. It is time to move on.”