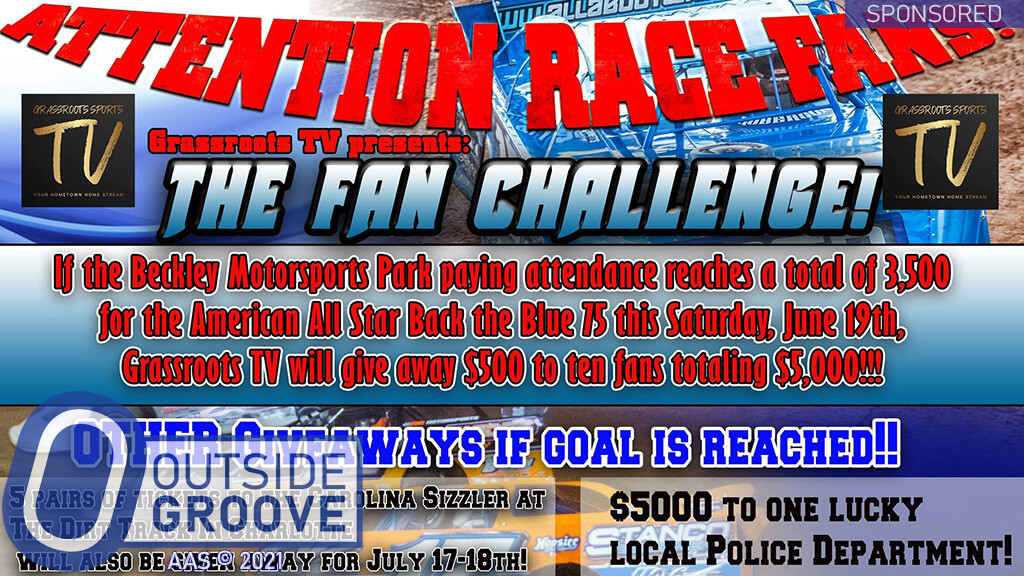 Grassroots Sports TV wants more people to watch the races — both with their streaming service and in-person. To prove their intentions, they’re offering an incentive., the Fan Challenge. If the paying attendance for the Saturday, June 19, show at West Virginia’s Beckley Motorsports Park reaches 3,500 or more (pits and stands combined), Grassroots Sports TV will award $500 to 10 lucky fans. The event, which is one of the track’s largest this year, features the American All-Star Series Presented by PPM Racing Products, with the $10,000-to-win Back the Blue 75.

Grassroots Sports TV’s Dalton Lamb hopes to change some of the misconceptions of streaming companies such as his. Some criticize the companies as taking a lot from the sport and giving little in return.

“The premise of our company has been not to hoard the money [earned from streaming events], but to give it back,” said Lamb. “I am still working a 40-hour-a-week job. I’m not by any means rolling in the dough.”

Others argue that streaming companies encourage fans to stay home instead of going to the track. Lamb disputes that.

“Most of the time, if there’s an event within driving distance, [fans] would rather go see that event in-person as opposed to watching it on a stream,” Lamb said. “We have the data to back that up. [For example,] the fans in northeast Tennessee, when the American All-Star Series is in that region, most of the time, they’re not watching those [races].”

In addition to the Fan Challenge, Grassroots Sports TV is offering other giveaways. If the event hits its attendance target, they’ll award $5,000 to a local police department. Plus, they’ll give away five pairs of tickets to The Carolina Sizzler race at The Dirt Track at Charlotte Motor Speedway, held on July 17–18.

“I’ve been in sales and marketing for a long time,” said Lamb. “To get something, you got to give something. We want people to subscribe and continue to subscribe. This [promotion] is not only a good way for us to get our name out there, but it also lets people know we’re different. We want to help promote tracks and their races. Doing something like this reassures people that.”

In addition to Beckley Motorsports Park on Saturday, the American All-Star Series Presented by PPM Racing Products also has a race the night before. On Friday, June 18, the tour heads to West Virginia’s Princeton Speedway, for a $3,000-to-win show. Both races at Princeton and Beckley televise live on Grassroots Sports TV.