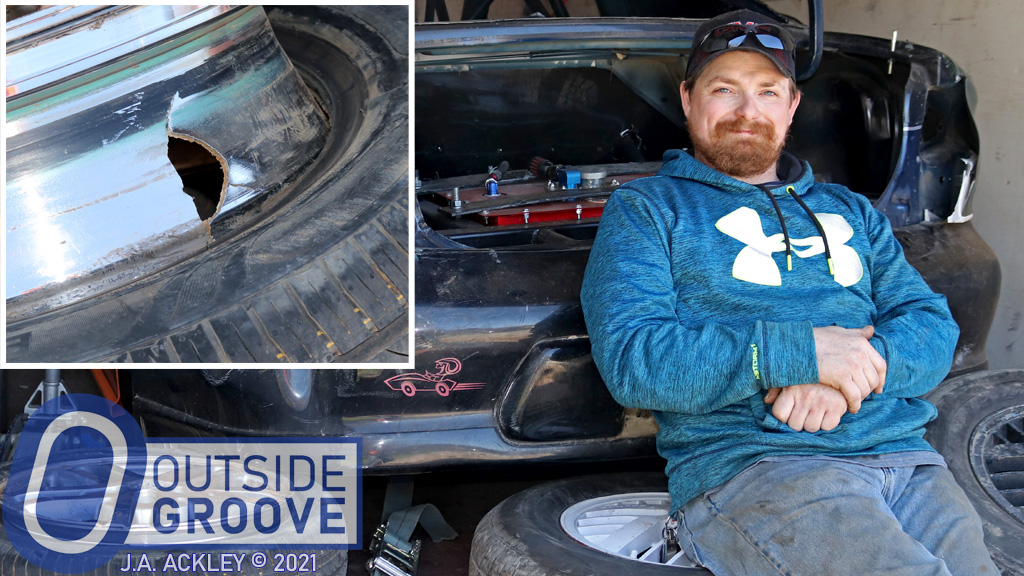 When Jamie Wood loaded up his trailer after running the Bristol Dirt Nationals, he returned home with a used-up race car. As he raced for a transfer spot into the hornet feature on Saturday, an unexpected calamity hit.

“Coming out of four, the car would not turn,” said Wood, 34, of Mechanicsville, Iowa. “I had the wheel cocked all the way to the left, and it wouldn’t do anything. The middle part of the corner, I knew something was going on. I was doing everything I could to try to shave some speed off.”

“I bounced off the [outside] wall and tried to correct it down the frontstretch,” Wood said. “Somebody caught me in the left-front corner, spun me around, and backed it into the infield wall.”

That signaled the end to Wood’s Bristol adventure. Back in the pits, he assessed the damage. Wood discovered a flat right-front tire. After closer inspection, he found the right-front brake rotor was missing and a big gash inside the right-front wheel. Wood said he’s not sure if the rotor caused the flat or something else did. Regardless, he remains certain of the status of his ride.

“The car is junk,” said Wood. “It collapsed my left-rear strut tower. The rear strut support was ripped out. The cage in the back of the car is bent. That car will never be able to go straight again.”

After returning home, Wood discovered that the car wasn’t the only thing tweaked after Bristol.

“My back hurt and [I went to] get an adjustment from my chiropractor,” Wood said. “He told me I had four dislocated ribs.”

Despite the damages, Jamie Wood remains eager to return to Bristol.

“It’s always been a dream to be at Bristol,” said Wood. “Me and my grandfather would watch [NASCAR] races. Finally, to get the opportunity to be there, let alone be on the track, it was amazing. If they were to do it again, I’ll be back.”