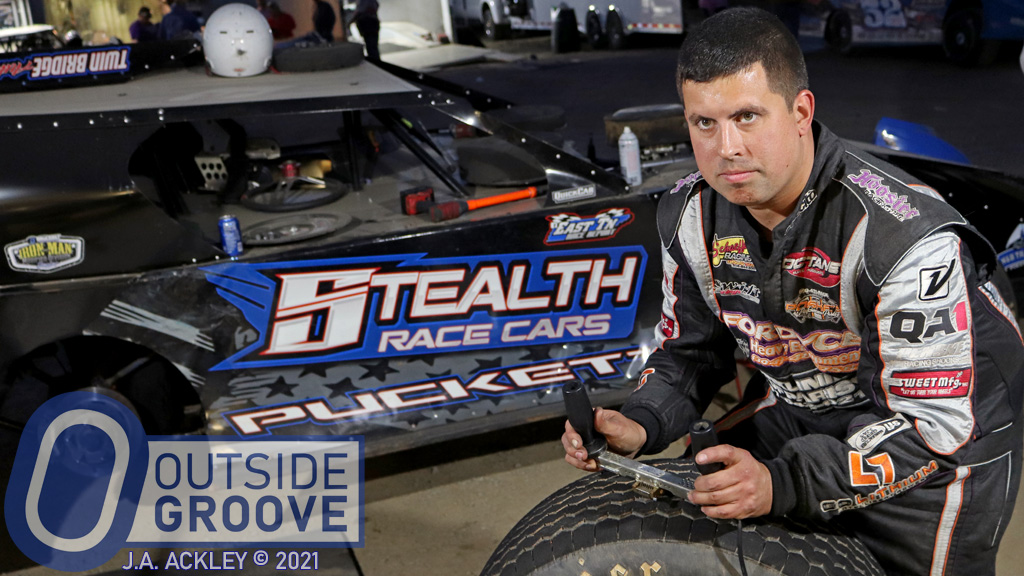 KC Burdette turned his first-ever laps ever at Volunteer Speedway, in Bulls Gap, Tennessee, during qualifying for the Brucebilt Performance Iron-Man Modified Series event last fall. Burdette was fast out of gate, setting fast time for the night. After pulling off the incredible feat, he went back to the grind … and then the sipe. No, Burdette didn’t spend the long wait between qualifying and the feature celebrating. He went to back to work.

“It’s like art,” Burdette said of preparing tires. “No one can build a masterpiece in two minutes.”

The Parkersburg, West Virginia, native prefers to work his tires at the track rather than at the shop.

“You don’t know what the track is [until] you get there,” said Burdette. “Just because you went to this track last year or last weekend, it doesn’t mean it’ll be the same again.”

Burdette learned much of his craft from his friend of 15 years, the legendary late model driver Scott Bloomquist. He grew up a Bloomquist fan and now works for his childhood idol. Burdette is one of the few Bloomquist trusts to work on his tires.

“The four things that touch the dirt — [they’re] more important than any shocks on your car,” Burdette said of tires. “Every tire has an optimum temperature when that tire is its best. It’s your job as a driver or as a tire man to keep up with the tires and the track.”

Modifieds permit only grinding and siping tires, which Burdette uses to adjust how the tire heats up during the feature. He admits that there are multiple ways to reach that target temperature.

“I look at my work [as a tire man] like an interior painter on a house,” said Burdette. “You got a roller and a paintbrush. Five different people can grab [those tools] and you’re going to see five different results.”

On this night at Volunteer Speedway, Burdette raced on behalf of friend Jody Puckett, proprietor of Stealth Race Cars in Melvin, Kentucky. While Burdette started up front, he spun on the first lap. He restarted in the rear and after spinning again, he parked the car. The team later discovered his right-front wheel caught on the chassis when back-steering. However, his qualifying run proved his entry had plenty of speed.

KC Burdette has a busy 2021 ahead. He intends to continue helping Scott Bloomquist while still racing, too. While the details have yet to be formally announced, expect to see Burdette in a modified from Stealth Race Cars and a late model from Team Zero Racecars.

“A lot of big things [are coming this season] that I’m really excited for,” Burdette said.