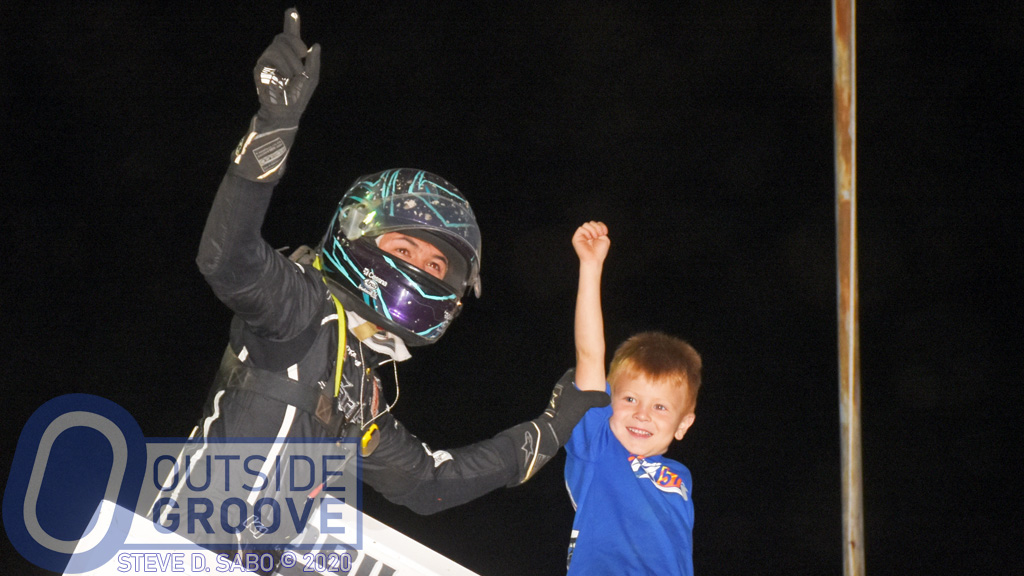 After losing his NASCAR Cup Series ride with Chip Ganassi Racing, Kyle Larson returned to his open wheel roots — and with a vengeance. Larson has since frequented victory lane often. He celebrates a win usually with his wife, Katelyn; and two children, Audrey and Owen. He’s pictured here with five-year-old Owen at Grandview Speedway in Bechtelsville, Pennsylvania, where he won one of the 30th Annual Pennsylvania Sprint Car Speedweek events.

Larson, 27, dominated the Pennsylvania Sprint Car Speedweek. In nine races, he racked up four wins — at trio of Keystone State ovals, Grandview, Port Royal Speedway, Williams Grove Speedway, as well as Hagerstown Speedway in Maryland. The rest of his Speedweek record includes two seconds, a third, a fourth, and a sixth.

When he came back to open-wheel racing full-time, he began with eight straight wins. He shattered a 33-year-old track record at Federated Auto Parts Raceway at I-55 in Pevely, Missouri, by breaking the 10-second barrier.

Larson’s career began in open wheel competition. The native of Elk Grove, California, started in outlaw karts and then progressed to USAC midgets, sprint cars, and Silver Crown. He moved into stock cars on the national scene when he raced for Rev Racing, as part of the Drive for Diversity program, in 2012. In his first season, he won the ARCA Menards Series East championship. A NASCAR Xfinity Series ride followed in 2013 and then a full-time NASCAR Cup Series ride in 2014.

After saying a racial slur during an iRacing event, many of his sponsors at Chip Ganassi Racing pulled their sponsorship, resulting in Ganassi terminating Larson’s contract with his team. Larson apologized and then returned to dirt racing, where his ability to wheel a race car has shined brightly. With unquestionable talent, as evident by an incredible tally of finishes recently in sprint car racing, pundits wonder if Kyle Larson is destined to return to NASCAR. Time will tell.