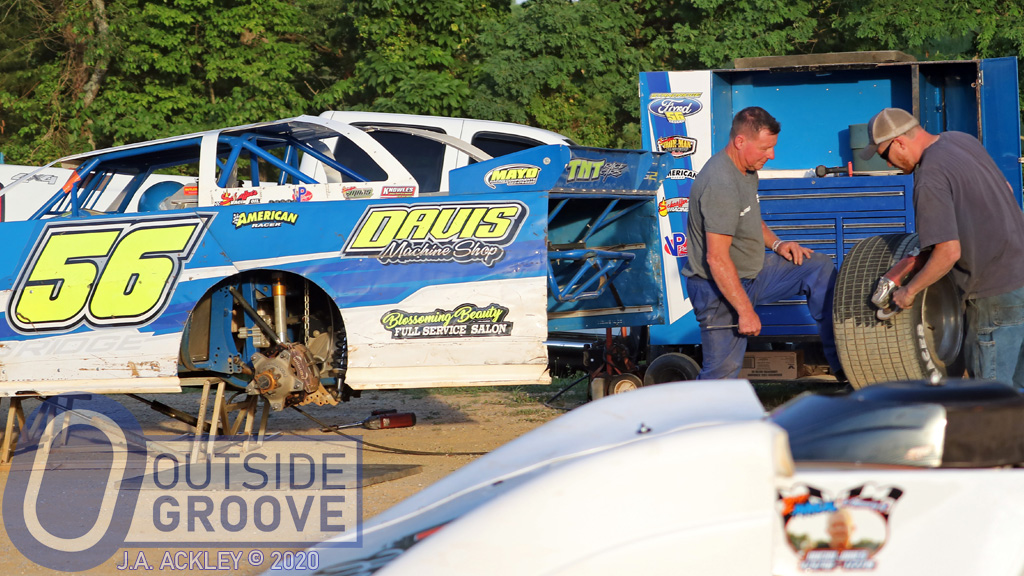 The incomes of Joey Standridge and Andy Standridge don’t allow them to buy the latest and greatest of equipment. But, they make it work. The father-and-son duo does it by sheer willpower, innate mechanical ability, and putting much more time and elbow grease than the average racer puts in these days. And, if it’s race day, you can count on them bringing at least one of their blue No. 56s to the track.

“Some way or another we find a way to get [to the races] every week, but it’s not easy,” said Andy Standridge, of Tellico Plains, Tennessee. “We have to run old, used parts most of the time. If we break something, sometimes we can’t buy a brand-new part. So, we weld it or fix it ourselves. It’s very time-consuming.”

Both run on Ford power, built by themselves. The super late model engine is based off a NASCAR Cup Series power plant from the late 1990s to early 2000s. It measures only 370 cid, much smaller than most super late model engines that surpass 400 cid. The sportsman uses a “basically stock” 302 engine, bored 30 over, which makes it 306 cid.

The Standridges do most of their own work on their cars, with exception of shocks as they do not have a shock dyno. The do-it-yourself mentality extends to their haulers as well. They use a home-built ramp truck, with a sleeper on it. The Standridges add to that “rig” another single-axle open trailer when they haul both cars. They recently obtained an enclosed trailer and a box truck. The Standridges will convert the back of the box truck to living quarters for overnight trips.

“You gain a lot of knowledge in doing it yourself,” Andy said. “If we don’t know how to do it, we will learn how to do it. That way we won’t have to pay somebody else.”

Andy’s day job consists of doing maintenance at a factory while Joey works as a janitor at a school. Andy Standridge offered the following advice for those who want to go racing, but get intimidated by the shiny new race cars and big rigs permeating short tracks today.

“How bad do you want it?” said Andy. “To do what we do, you have to make a lot of sacrifices. You don’t get to eat out all the time. You don’t spend a lot of time with your family. You’re constantly working, because you don’t pay somebody else to do the work for you. You’ll have friends that have stuff they want you to do and you don’t do it because you don’t want to spend $20. You need that $20 to pay your way into the racetrack that weekend.”

However, to the Standridges, all that effort is worth it.

“[We get a] feeling of enjoyment when we show up with a hauler we built ourselves, with a race car we assembled and maintained ourselves, and an engine we built in our shop compete against — and even outrun — some of the big-time guys who do it for a living or the guys on a local level who have way better stuff than us,” Andy said.