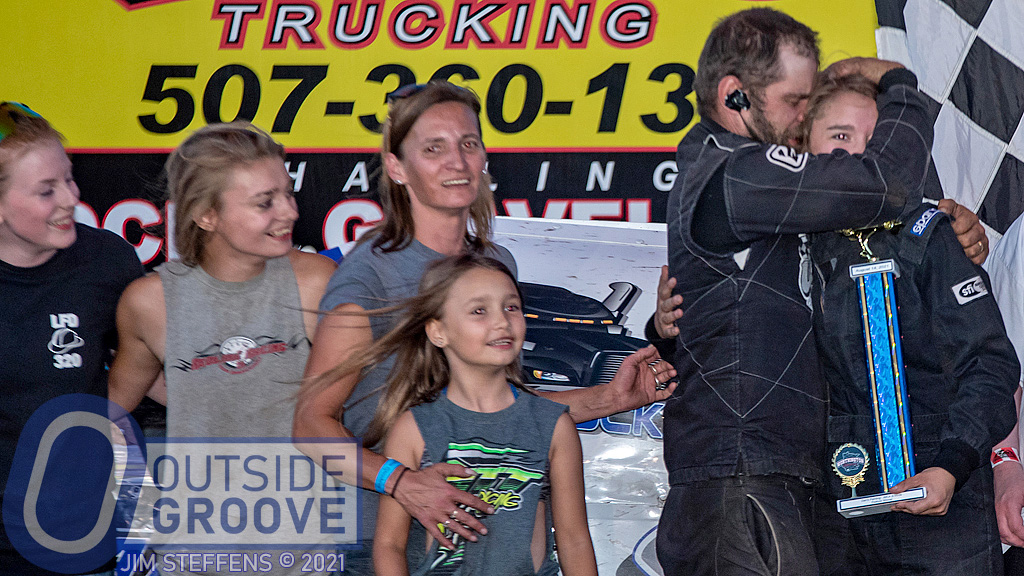 Alissa Palsrok won her first IMCA sport mod feature this past weekend. She shared the triumph with her father, Chris Palsrok, as well as her mother, Alayne; sisters Payton and Lizzy; and friend Kaylah Robinson. The victory at Minnesota’s Worthington Speedway gave her the confidence she searched for in her third season.

“I now know winning is possible and I know I can win more,” Palsrok, 16, of Estherville, Iowa, said. “I’m still waking up and thinking it was a dream, but it is actually a dream come true.”

After starting on the pole, Palsrok entered into a dogfight with standout driver Colby Fett.

“Colby had me, but then a caution flew on that lap, which put me back in the lead,” said Palsrok. “He got under me again, but then slid up the track in turn four, so I dove under him.”

When Fett got a flat tire, Palsrok charged on to the checkered flag.

Her father races in the modified and stock car divisions. As Palsrok won, Dad sat in the lineup area, ready for his stock car feature.

“I ran up to him in the lineup to see if he could join us in victory lane,” Palsrok said. “The official let him get out of the car so he could be in the celebration.”

The elder Palsrok relished the moment.

Chris Palsrok taught his daughter how to maintain her car on her own. The win provided validation for all those lessons her father taught her.

“My dad races a lot and has won a lot,” Palsrok said. “I learned by growing up in the shop. I can do all my own sheet-metal work, and I’ve pulled and installed several engines.”

With a win under her belt, Alissa Palsrok hopes to find more success at the IMCA Speedway Motors Super Nationals next month at Boone Speedway in Iowa.

“I’m looking forward to my first IMCA Super Nationals,” said Palsrok. “It’s the biggest challenge to make it to any of the qualifying features.”